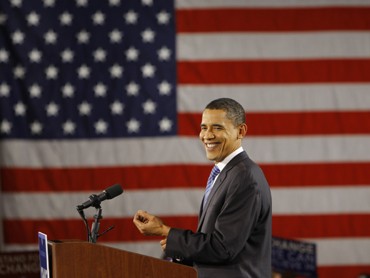 Very interesting speech by Obama today on bringing the Iraq War to a close.
Obama stated moments ago that troop levels in Iraq will be brought down to 50,000 by August 2010 — and then all forces will be removed by the end of 2011.
America’s financial crisis is driving much of this. There is just no way that Obama can keep his fiscal accounts in order with a high-cost, permanent expansion of America’s empire of military basing.
I was bothered by Obama’s commitment to increase the size of the Pentagon. He really should be waiting for a comprehensive review of America’s global commitments and basing. Adding more to an already well-resourced part of America’s global stability tool box is wrongheaded.
He mentioned Dennis Ross’ name right in line with envoys George Mitchell and Richard Holbrooke — making a kremlinological assessment of Ross’ real strength on the Obama team even more complex.
His commitment to deep diplomatic engagement on a comprehensive basis in the Middle East is exactly the right track.
More later.
— Steve Clemons