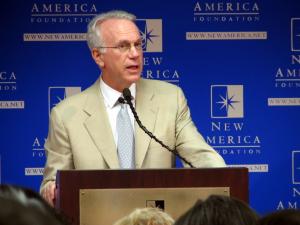 This is a guest post by James K. Glassman, former Chairman of Public Broadcasting and former Under Secretary of State for Public Diplomacy. Glassman was also editor of Roll Call and was founding editor of The American, and is now president of the World Growth Institute.
This piece first ran in The American earlier today. Glassman’s views are his own, but whether one agrees with him on the results likely with bank nationalization, his thoughts below are worth a read.
Steve Clemons agrees that the risks of serious moral hazard and corruption are quite high with the level of public sector money runnning into private sector hands, but there may be little choice at this point. Clemons also believes that there is an undeveloped debate yet to be had about the manner and template of re-aligning the interests of private sector multinationals with the interests of taxpayers if they are taking bailout money. This realignment has to happen, but at the same time, there are serious downside probabilities about the very performance of these firms.
Remember the House Bank
Banks that are owned by governments will be run to benefit politicians.
As the federal government moves closer to nationalizing more of America’s largest financial institutions, including Citigroup, it’s time to recall the history of federal ownership of commercial banks.
Certainly, the record of the Second Bank of the United States (1816-41) should give us pause. The bank was 80 percent privately owned but effectively controlled by the president and Congress. It was riddled with fraud and corruption and eventually went bankrupt.
The most recent admonitory example is the House Bank. I know it well. In September 1991, when I was editor of the newspaper Roll Call, our reporter Timothy Burger, now at Bloomberg News, broke the story that led to the exposure by the Ethics Committee of 269 House members who had abused the bank with significant overdrafts. In the end, many of them, including Rep. Stephen Solarz of New York, were defeated in 1992 re-election bids.
It is not difficult to imagine the argument that, if taxpayers own a bank, its branches should serve all Americans and not be concentrated in certain states or neighborhoods.
“The House Bank,” said a Sept. 19, 1991, report by the General Accounting Office, “is a private bank subject only to regulations established by the House of Representatives.”
The House ran its own bank in a way that resulted, in six months alone, in 4,325 overdrafts–an annualized average of 20 per House member. Some 134 members (about one-third of the House) kited a total of 581 checks amounting to $1,000 or more each–again in just six months.
If this sounds like an inappropriate comparison, it is not. Banks that are owned by governments will, very naturally, be run to benefit the politicians who serve as agents for the taxpayer-owners and who directly provide the funding and the oversight.
In the case of a nationalized bank, perhaps the politicians will not benefit personally, as they did with the House Bank–although, based on the track record of recent years, we can expect some chicanery of that sort. The main concern, however, is that the banks will be subject to management by political objective.
Even under current circumstances, where the U.S. government is the largest shareholder in several large banks but owns less than 10 percent of the stock, those banks are now subject to federal laws that prescribe how their managers are to be compensated.
The federal government now owns more than 75 percent of AIG, the giant insurer, and industry executives say that politically inspired limitations on AIG’s conferences (which the company uses both as incentives to its own sales people and to drum up more business from key customers) are hurting businesses. The company has cancelled 160 such conferences this year.
It is not difficult to imagine the argument that, if taxpayers own a bank, its branches should serve all Americans and not be concentrated in certain states or neighborhoods. Or that the bank should have properly diversified employees and suppliers. Or that it should lend broadly and democratically. Or that it must not “overcharge” consumers on credit cards.
Certainly, all of these political pressures on financial institutions already exist, but one can imagine them being sharply intensified with government ownership. Devising the right policy to deal with banks whose losses have brought them to the brink of insolvency is no doubt difficult.
But before rushing to nationalize, Americans should recall the experience of the House Bank–an institution with only $1.5 million in assets. Imagine the temptation of running banks with assets in the trillions.
— James K. Glassman