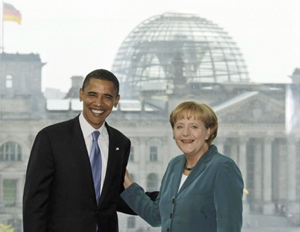 Nader Mousavizadeh, former special assistant to and speechwriter for UN Secretary General Kofi Annan and Goldman Sachs executive, just sent over his oped, “How to Navigate the New Global Archipelago,” which appeared in the Times of London on Friday, John McCain’s birthday.
Mousavizadeh’s excellent analytical piece echoes a number of the themes I raised in this TWN essay on the Kosovo and broader geostrategic dimensions of the Georgia-Russia conflict.
Essentially, Mousavizadeh advises Obama to resist the temptation to offer McCain-lite responses to high stakes global crises and flash points. He is absolutely right.
I’ll have to add him to my growing list of those who should be high level picks for key positions in an Obama administration. I’d add him to a McCain list as well — but unfortunately — enlightened thinking on global affairs is not something that easily transfers politically at this point in our history.
Read the entire piece, but I am enthusiastically compelled to provide a big chunk of this progressive/realist essay:

As Russia decides where to draw its new boundary with Georgia a reckoning will be due – among the people of Georgia living amid the wreckage of a failed gamble, and among their Western allies suddenly confronted with diplomatic impotence. But for Barack Obama, a different kind of reckoning is taking place: what happens when the formidable political instincts of the probable next US president meet the limits of his experience in national security.
From everything he has said and written, it is evident that Mr Obama, uniquely among leading US politicians, understands the new contours of global affairs – that the world won’t be divided into neat categories of democracies versus autocracies, nor will it converge toward a Western model.
He knows instead, that a world of parts is emerging – of states drifting farther away from each other into a global archipelago of interests and values; and that in an archipelago world, appeals to freedom, democracy and human rights must compete with aims of stability, resource security and the projection of national power.
And yet, as the Georgian conflict spirals into a global crisis, Mr Obama finds himself on the back foot. Initially hesitant in his response to Vladimir Putin’s expedition in South Ossetia, he has had to ratchet up his rhetoric in response to John McCain’s for-us-or-against-us stance.
This is, as Obama the politician would know, a loser’s game, even if Obama the statesman is still finding his way. Trying to outmuscle Mr McCain will invite only contempt among his foes and bewilderment among the millions of his supporters yearning for a different kind of US engagement with the world.
Georgia is only the most recent augury of a new era of zero-sum diplomacy for which the West is ill-prepared. The West’s surprise at Russia’s response was disconcerting enough. More troubling was the outdated assortment of threats with which it has tried to sound tough. Among the suggestions was a boycott of the 2014 Winter Olympics hosted by Russia, denying Russia membership of the World Trade Organisation and excluding it from G8 meetings. A common thread links all three: they are as difficult for the West to achieve as they are unlikely to alter Russia’s behaviour.
Obtaining an Olympic boycott six years after the crisis in Georgia will be extremely challenging. Barring access to the WTO just after the collapse of the Doha talks may be less of a sanction than it sounds.
The G8 threat is even less convincing, although it is telling evidence of a 20th-century mindset that is oblivious to international changes. Before Georgia it would have been hard to find anyone seriously arguing for the importance of G8 meetings (Canada and Italy are members; China is not); much less that being denied entrance could be construed as leverage with a great power.
Far more important to the future of international diplomacy was a little-noticed meeting in Yekaterinburg, Russia, last May. There, for the first time, foreign ministers from the so-called BRIC countries (Brazil, Russia, India and China) met to advance their common agenda in a world hitherto defined by Western rules. The BRICs are expected to overtake the combined GDP of the G7 by 2035, and they laid down a marker that they will not wait for reform of the post-Second World War institutions to be heard.
Does this mean that China or India will take Russia’s side against the West? Not necessarily, but it does suggest a more complex interplay of interests in future. Strategic leverage will have to be earned – crisis by crisis, interest by interest.

I am going to have to ask Mousavizadeh to guest blog a piece for TWN.
— Steve Clemons

Blogger Poll: Right of Center Bloggers Think Palin is a Plus
What Does It Mean When. . .James Steinberg Painted His House in March?