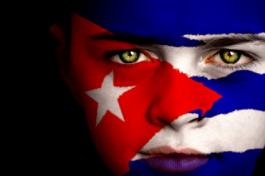 The Obama administration today lightened travel and remittance restrictions for US-based relatives of Cuban citizens residing in Cuba.
The limit on relatives is noted at “second cousins.”
Hooray! — not.
OK — it’s some progress. But this is progress that the Cuban-American right wing wanted.
What I and other sensible national security strategists wanted was for President Obama to stand by his moral and ethical fiber that engagement is good, that people to people exchange makes sense, that the Cold War is over, and show some understanding today that Cuba is exporting not revolution and arms today — but doctors.
I remember very well during the height of the Cold War how my father — who was a US Air Force service man — used to comment on all the things that the Soviet Union would do to constrain and control the lives of its citizens.
I remember well how he said everyone was required to carry “their papers” and how they couldn’t travel without government permission.
It is outrageous and simply unacceptable that Barack Obama, the first ethnic mix of any sort who wonderfully defies categorization residing in the White House, is creating a class of opportunity and privilege for one class of ethnic Americans and perpetuating an anti-American, anti-human rights restriction by the US government on the movement of non-qualified US citizens.
The travel restrictions on Americans have always been wrong — and have been more consistent with a totalitarian, Communist government than they have been with a traditional American democracy.
Obama and his team should find a way to step back and realize that while they have made progress on Cuba — this is embarrassing progress, ridiculous progress — that is anti-American in spirit and at its core.
— Steve Clemons