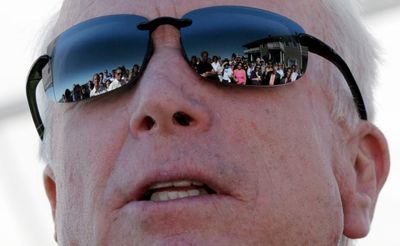 Joseph Loconte offers a spirited defense of John McCain’s foreign policy and national security positioning in a piece that ran today in the Weekly Standard.
I liked his essay because Loconte articulates the fault line that runs through conservative circles on foreign policy. It happens to be a fault line that runs through a significant segment of the liberal/progressive establishment as well, and that is that there are those like McCain who are committed to the militant export of American-style democracy and those who are motivated by other objectives that depend less on the Pentagon.
I sometimes wonder whether those who aspire to be President of the United States — and then once achieving that post becoming a “great” President — are drawn to crises and to wars as a way of defining their presidencies. I realize that FDR was more than a war-time president, and Truman, Eisenhower, Kennedy, Nixon, Ford, Carter, and even Reagan, George H.W. Bush and Bill Clinton had key domestic policy goals and occasional achievements that could stand on their own independently from from the cold or hot conflicts stirring in the international arena. But wars and conflicts are remembered more on average than the domestic challenges.
When John McCain lost the Republican primary in 2000 to George W. Bush, he planned a 2004 comeback — and his attack line was going to follow the course of Bush’s closeness to Enron and the many Enron-related and similar-type corporate cronies in Bush’s government. McCain’s team saw Bush’s closest allies as “crooks” who had no real concern for the public interest. They had hoped to dig up what scandals they could on Bush and his team and feed it to Senator Joseph Lieberman who could help highlight this material in his role as Chairman of the then-titled Senate Committee on Governmental Affairs.

But then the 9/11 terrorist attacks occurred, and McCain’s hopes for a rematch against Bush collapsed. War and conflict trumped domestic ethics.
That is one of the reasons why I think that John McCain has sculpted his political profile so starkly in military terms because he doesn’t want to be trumped again.
But from my vantage point, McCain seems to be stalking more wars not because they are ones that need to be fought but because he needs them politically.
Loconte somewhat disagrees and gives McCain a pass. He suggests that by acknowledging the costs of war, McCain is not war-mongering in his assertions that wars must be fought today to avoid paying higher costs tomorrow.
If McCain actually believes what he is saying, it is mind-blowingly frustrating to imagine a president who would commit to a further collapse of the American military machine by adding more security obligations in the next term and not take stock and then mend and repair the miserable condition of America’s national security portfolio.
Loconte writes:

On the subject of war, McCain’s voice is indeed distinct. If many conservatives cling to naive beliefs about the role of military power in securing peace, he does not appear to share their faith.
His speech at the World Affairs Council offered one of the most sober, poignant, and morally mature perspectives on war by any politician in a generation. It was reminiscent of Winston Churchill, a statesman he clearly admires. “I detest war. It might not be the worst thing to befall human beings, but it is wretched beyond all description,” he said. “When nations seek to resolve their differences by force of arms, a million tragedies ensue.” Even so, McCain abhors the appeasing reflex of many political and religious liberals: As detestable as war is, the consequences of inaction may be far worse. Americans must sometimes pay the wages of war, he said, “to avoid paying even higher ones later.”
How might the McCain doctrine play itself out on the world stage? Democratic ideals always collide with undemocratic realities abroad and imperfect realities closer to home. Like Churchill, McCain’s weaknesses–his reputed stubbornness, self-righteousness, arrogance–seem nearly as large as his strengths. “When Winston’s right, he’s right,” Lord Birkenhead once said of him. “When he’s wrong, well, my God.”
Still, McCain’s family history and life experiences, so unlike those of Clinton or Obama, will likely count for something. He remembers the day when a Navy officer arrived at his house, shouting to his father that the Japanese had bombed Pearl Harbor–and of his father quickly packing to return to the submarine base where he was stationed.
“Whatever gains are secured, it is loss the veteran remembers most keenly,” he said. “Only a fool or a fraud sentimentalizes the merciless reality of war.” Unlike his Democratic rivals, McCain projects a balance of idealism and realism, of tenacity and prudence–forged in part from his own experience in Vietnam–which seems especially relevant for a nation at war. “For it is one thing to see the Land of Peace from a wooded ridge,” wrote Augustine, “and another to tread the road that leads to it.”

I like Loconte’s provocative style, but this piece gives McCain a pass on matters of war and peace that he doesn’t deserve, at least not yet.
McCain’s comments on the Iraq War and the inevitability of more wars in the region has been reckless.
And the notion that McCain can maintain these wars and the huge military expenditures that we have today without raising taxes is also folly. Nixon Center President Dimitri Simes makes this point today in an interesting piece by Eli Lake about Republicans turning towards Obama.
We should all worry about future presidents who have forgotten John Quincy Adams’ admonition that America should not go out to “seek monsters to destroy.”
The sick reality is that there are too many presidents who seek such monsters as ways to define themselves and their tenures — and as a way to generate “legacy.”
Despite Loconte’s effort to suggest that McCain has some realism in him, McCain appears like a dragon-chaser. Hillary Clinton too frequently comes off as someone who might define her presidency through conflict. Her commitment to “coercive diplomacy” has the ring of a dragon-chasing president.
And Barack Obama, while less committed to this path than the other presidential options, may take it anyway as he “reacts” to a world testing his resolve and kicking the tires of hope rather than realism in international affairs.
— Steve Clemons

100 Years in a Country That Had Nothing to Do with 9/11. . .
The World is Watching and Wants More: Clinton-Obama Race Should Go All the Way