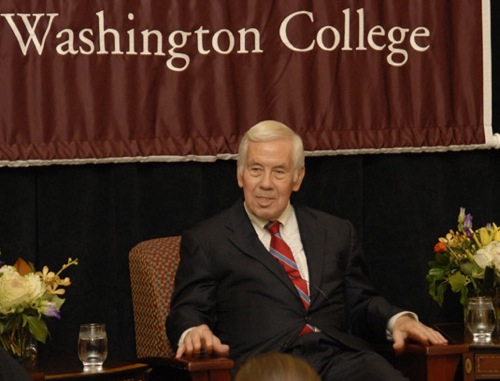 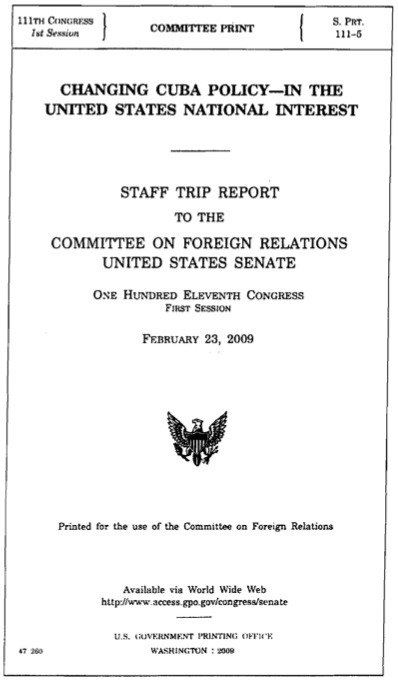 Senate Foreign Relations Committee Ranking Member Richard Lugar, a long time realist and serious strategic thinker about America’s national security challenges, has just popped the bubble of those who have used Cuba for decades in their ineffective ideological crusades.
Lugar’s team is releasing on Monday a new ‘committee print’ titled “CHANGING CUBA POLICY — IN THE UNITED STATES NATIONAL INTEREST.” (pdf here)
For US-Cuba policy junkies, the report is pretty breathtaking in its indictment of decades of American failure in trying to adjust Cuba’s national government’s behavior via sanctions and an embargo.
In his opening missive in the document, Senator Lugar states:

Economic sanctions are a legitimate tool of U.S. foreign policy, and they have sometimes achieved their aims, as in the case of apartheid South Africa.
After 47 years, however, the unilateral embargo on Cuba has failed to achieve its stated purpose of “bringing democracy to the Cuban people,” while it may have been used as a foil by the regime to demand further sacrifices from Cuba’s impoverished population.
The current U.S. policy has many passionate defenders, and their criticism of the Castro regime is justified. Nevertheless, we must recognize the ineffectiveness of our current policy and deal with the Cuban regime in a way that enhances U.S. interests.

This report is important because it builds on questions that Richard Lugar asked in writing of Hillary Clinton during her Senate confirmation hearings. I noted then that buried in the many questions submitted by Lugar was an implied message to the administration that he would not accept any more illusions that the status quo in the relationship was working. 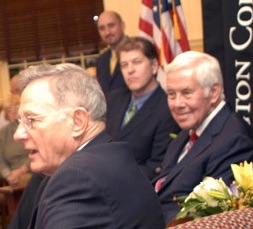 In response, Hillary Clinton promised a full administration review of US-Cuba policy which Assistant Secretary of State for Western Hemispheric Affairs Tom Shannon is leading now. What is also interesting is that someone close to Shannon and those potentially contributing to this policy review told me it would be important for the administration “to hear from Congress.”
Lugar has now provided much ammunition in his powerful commentary on the need for US-Cuba policy to change, using what was essentially a trip report by Senate Foreign Relations Committee senior staff member Carl Meacham as a vehicle to convey his views. Meacham traveled to Cuba as part of a staff delegation in January 2009, organized by the non-partisan Lexington Institute.
Key findings of the report include that the Cuban regime has become fully institutionalized; positive developments are occurring in Cuba but should not be mistaken as structural reform; that popular dissatisfaction with Cuba’s economic situation is the regime’s vulnerability; and the regime appears to be open to some bilateral dialogue and cooperation.
The report endorses the rather minimal steps already promised by Obama on relaxing restrictions on “Cuban-American” travel and financial remittances to family members — but then pushes forward on many other fronts with a sopisticated and methodical review of other steps the administration should consider, most of which are possible even within the confines of the Congressionally-imposed embargo.
This is a brilliant piece of policy and political craftsmanship.
I call it the “slippery slope strategy” in which Lugar is shining a big spotlight on the inadequacy and failure of US-Cuba policy that for too long has been held in place by domestic constituencies who were working at odds with the American national interest. Lugar is pushing buttons and nudging Obama’s team into put itself forward constructively — and with these steps, it becomes easier to see the broader embargo as a serious anachronism and a mistake that needs remedy.
US-Cuba policy is the only place in the world where the nearly extinct Cold War actually got colder — and it’s time this relationship thawed.
In her piece on this not yet released report today, Washington Post national security correspondent Karen DeYoung finishes with:

In his letter to senators, Lugar noted that Obama’s election and the replacement of President Fidel Castro with his brother RaÃƒÂºl have generated debate important to U.S. security interests, “broader U.S.-Latin-American relations, and global perceptions of U.S. foreign policy.”
“Despite uncertainty about Cuba’s mid-term political future,” Lugar wrote, “it is clear that the recent leadership changes have created an opportunity for the United States to reevaluate a complex relationship marked by misunderstanding, suspicion, and open hostility.”

Nation editor Katrina vanden Heuvel once told me at a cocktail party that we were working together to make “realism the new liberal ideology.”
It has been working, and Richard Lugar has just done his team on the Minority side — as well as his colleagues Committee Chairman John Kerry and Senator Christopher Dodd, who has long set the “gold standard” in US-Cuba policy legislation and proposals — a great favor by pushing this report into our national debate.
It’s time that we stopped letting other national leaders, like Venezuela’s Hugo Chavez, colonize the affections and interests of Cuban citizens who are actually interested — like the rest of the world — in whether Obama has the guts and vision to generate some meaningful strategic shifts for the United States.
Cuba is the lowest hanging ripe fruit on America’s tree of foreign policy options. Change is easy there — and overdue.
— Steve Clemons
Ed. Note: Photo above on the right side is of former Senator Birch Bayh, Senator Richard Lugar, New America Foundation/American Strategy Program Director Steve Clemons, and Washington College C.V. Starr Center for the Study of the American Experience Director Adam Goodheart at a November 12, 2007 Senatorial Colloquy at Washington College. The top photo of Senator Lugar was also taken at the same Washington College Senate Colloquy.

MEDIA ALERT: NPR’s All Things Considered on ‘A New Pivot in US-Cuba Relations’
<em>Guest Post by Win Monroe:</em> How Will Obama’s Troops Get to Afghanistan?