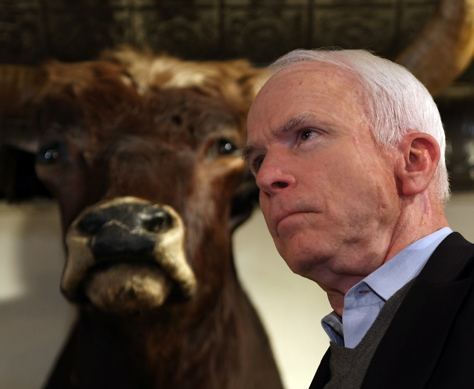 Uh-oh. John McCain thought that the deregulation of the banking sector was awesome before he thought it wasn’t awesome.
His enthusiasm for the success of financial market deregulation was captured by Paul Krugman in a note about McCain’s intentions to apply the same approach to the health care market.
Krugman writes:

Here’s what McCain has to say about the wonders of market-based health reform:

Opening up the health insurance market to more vigorous nationwide competition, as we have done over the last decade in banking, would provide more choices of innovative products less burdened by the worst excesses of state-based regulation.

So McCain, who now poses as the scourge of Wall Street, was praising financial deregulation like 10 seconds ago — and promising that if we marketize health care, it will perform as well as the financial industry!

But maybe McCain is against his former position by now. . .it’s that old Senator McCain vs. candidate McCain problem again.
— Steve Clemons

A View on 9/11
Chalabi: US Wants Secret Iraq Bases

34 comments on “John McCain: Let’s do to Health Care All the Great Things We Have Done to Banking”