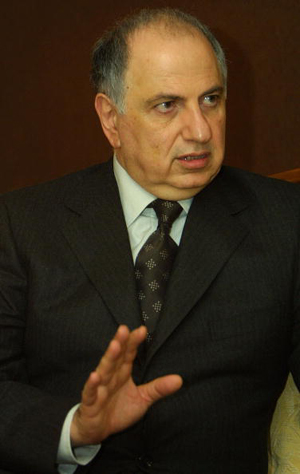 Former Iraq Deputy Prime Minister Ahmad Chalabi has told Iranian news sources that the U.S. is trying to engineer a deal with the Iraqi government to allow “secret bases.”
From the Middle East Times:

Former Iraqi Deputy Premier Ahmad Chalabi told Iranian state-owned media Friday the United States is seeking to establish secret military bases in Iraq.
In an interview with the Islamic Republic News Agency, Chalabi, once a Washington favorite, said U.S. officials are trying to inject agreements for secret bases in Iraq as part of the long-term security contract slated to govern U.S.-Iraqi relations when the U.N. mandate there expires at the end of this year.
“Within the framework of the security pact, the United States does not wish to merely have open military bases (in Iraq), rather secret military bases (there),” he said.
He said negotiations on the deal were ongoing following the acceptance of a formal draft agreement in August but noted there were still contentious issues surrounding legal authority over U.S. military forces and the use of Iraq as a staging ground for the broader counter-terrorism effort.

I am inclined to think Chalabi is telling the truth this time. But I would like to know what his neoconservative friends like Douglas Feith, Paul Wolfowitz, and Fouad Ajami think of Chalabi’s chit-chats with Iran.
— Steve Clemons

John McCain: Let’s do to Health Care All the Great Things We Have Done to Banking
STREAMING LIVE — Zbigniew Brzezinski & Brent Scowcroft on “America and the World”