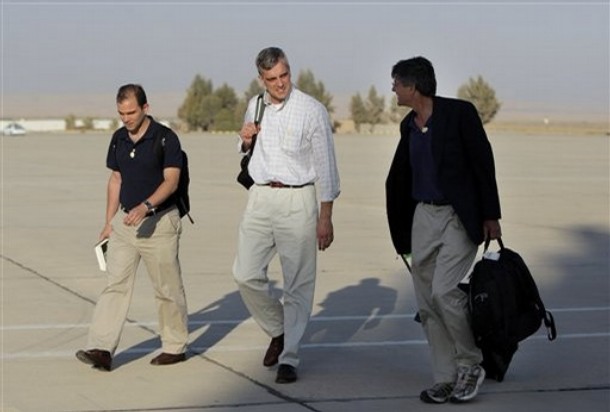 (Obama foreign policy team members Ben Rhodes, Denis McDonough, and UT Austin LBJ School Dean Jim Steinberg arriving in Amman, Jordan 21 July 21. 2008)
To some degree, I could tell in the upbeat voices of Joe Biden staffers I was calling frequently a week and a half ago — and in the day and a half long/cut short family friendly trip that Senate Foreign Relations Commitee Antony Blinken made to Hawaii at Biden’s encouragement before turning around and racing home without tan — that Biden was going to be announced as Obama’s running mate.
I still chuckle at the comment from Blinken that I ought not to read anything into his quick return.
I had other indications too. But watching what key staffers are doing tells a lot.
One senior level Republican friend told me for instance that John McCain called Mitt Romney Thursday morning this past week. My friend did not know whether McCain was calling to say “You’re it!” or “You were it — but you aren’t anymore!” or “You aren’t it and never were!”
So, we tracked down the people closest to Mitt Romney. I can’t go into details as it gets into personal lives, but we knew for certain that none of his closest aides were making any plans to move with Romney to meet up with McCain. So, we knew then that McCain’s choice was not the former Massachusetts Governor — who, like John McCain, used to be for a lot of cool things before he was against them.
Like much of the public, I thought that McCain was then going to go with Minnesota Governor Tim Pawlenty. I didn’t quite agree with a thoughtful Dem writer I know that “even though Pawlenty cut off his mullet, he’s still a guy who had a mullet.” Pawlenty had some strengths that could have impressed voters — so too Romney. In fact, many Republican realists were big Romney supporters, and McCain could have helped seal a serious rift in the national security community by taking on Romney.
On another front, senior McCain aides often laughed themselves silly about how hard Florida Governor Charlie Christ was supplicating before McCain and doing everything he possibly could to get the VP nod — and one could tell in the tone of their voices that McCain would simply never select Christ.
I always thought from a Machiavellian/almost Rovian point of view that the right choices for McCain to build out his campaign would have either been Mike Huckabee or Senator Sam Brownback. Huckabee is an incredible chameleon. Many of my most liberal friends — gays, enviros, and peace activists — were moved by Huckabee at one time or another. They thought he was folksy and had overcome many personal challenges — a theme that would have helped balance Biden.
And then of course, Huckabee was loved by social conservatives and evangelicals — which have been the backbone of amazing voter turnout machines in many past national elections.
But, McCain in a surprise move settled on Sarah Palin. I’m glad that a woman is on one of the tickets — but clearly Governor Palin is the wrong one.
But more importantly, James B. Steinberg — former Deputy National Security Adviser to President Clinton, former Brookings Institution Foreign Policy Division Czar, and UT Austin LBJ School Dean — is now removing a bunch of old oak trees that were destroyed in a storm a few years ago and is painting his house.
Neighbors report that he hasn’t done much to his place or yard in the several years he has lived there, and now all of a sudden — his place is getting a major face-lift.
My hunch suggests that Jim Steinberg, a solid choice to possibly serve as Barack Obama’s national security adviser in the White House, is about to go on the road.
I know I’m going to get an email from him telling to “stop it.” But Steinberg is great — and we are watching for signs that he’s going to move to be one of the key co-helmspeople of Obama’s national security/foreign policy machine in the next few months.
Why else would someone paint his house in the Texan hot August heat?
— Steve Clemons
For More: See Update above.

10 comments on “James Steinberg Paints House: What Can it Mean?”