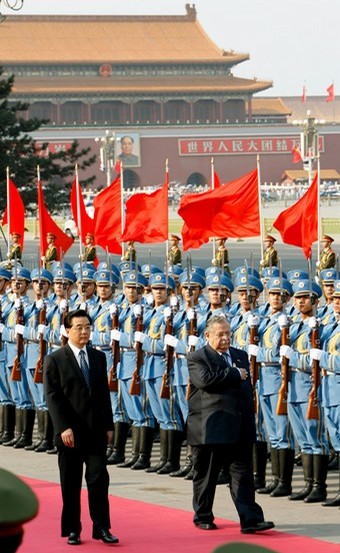 (Iraq President Jalal Talabani walks with his China President Hu Jintao)
George W. Bush, Richard Cheney, and presidential hopeful John McCain (as well as his new internationally ignorant but charming vice presidential running mate) have been promulgating the need to stay in Iraq to protect American interests.
Well. . .it seems we are also serving China’s interests. Some might say, “of course we are — given that China finances the largest share of America’s debt-burdened economy.”
China National Petroleum and Iraq have just signed the first major oil deal between the occupied-by-America nation and a foreign oil company. The deal is valued up to $3 billion (or 21 billion Chinese yuan…better start learning about those yuan).
A prominent international observer sent me this note this morning:

The Bush administration is not even good at imperialism.
Bush sacrifices American money and military lives to prop up a government allied with Iran in the hope of getting a few military bases and some oil contracts for its friends.
Meanwhile the Maliki government steals them blind, gives the first oil contracts to China, and tells Washington to forget about those military bases.
Oh, but thanks for taking care of the Baathists and the Sunnis for us!

7 comments on “Bush/McCain Not Even Good at Imperialism: China Gets Iraq’s First Foreign Oil Contract”