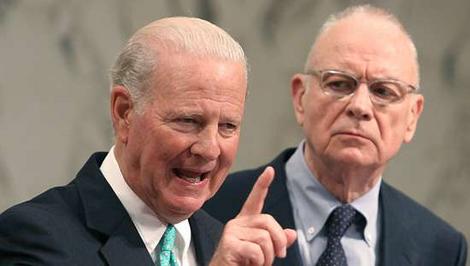 I need to issue a correction. Yesterday, when I was called by Edward Luce, Bureau Chief in Washington for the Financial Times, I was asked to expand on something I had framed in a question on a media conference call to former Bush administration intelligence adviser Rita Hauser, former Senator Lincoln Chafee, and former Congressman Jim Leach.
I asked these three — who are fellow travelers with essentially a wing of great Republican realists like Nixon, Brent Scowcroft, James Baker, Edward Djerejian, David Abshire, Carla Hills, and others — whether their support of Barack Obama was a major earthquake in Republican foreign policy circles and what the political implications of that were.

In so many words, I wanted to know how deep the feelings of anxiety ran about John McCain’s recent foreign policy positions. I say recent because John McCain is someone I have known since 1994 and his views that I thought I knew when he was on the board of directors of the Nixon Center, of which I was then executive director, seemed to have migrated into less realist directions in recent years.
I’ll get into the responses from Leach, Hauser, and Chafee in a future post — but Edward Luce, a very capable correspondent, asked me for further comment.
He quoted me correctly writing (that I said):

“There is a deepening split between the traditional Nixonian realist wing of the Republican party and the neo-conservatives that has become more pronounced with John McCain’s hardline anti-Russia rhetoric,” said Steve Clemons at the New America Foundation.
“I have good reason to believe that there will be other Republicans, such as James Baker [the former secretary of state], who may withhold endorsement from McCain rather than endorse Obama directly.”

I should not have said Baker’s name in this context. James Baker endorsed John McCain last February — a fact I was not aware of. I believed I had circumstantial reasons to think that Baker had not yet issued his support, but these were inaccurate and the comment of mine was sloppy and rushed.
Henry Kissinger has also endorsed and is advising John McCain. I heard Kissinger in person at a recent Atlantic Council dinner comment to a journalist that he supported McCain because had known him for decades.
The reason I sloppily mentioned James Baker III is because Baker represents an important, crucial wing of Republicans who were quite close to George H.W. Bush and who have tried to serve the nation and the incumbent Bush administration by suggesting national-interest templates to help solve current massive challenges. Baker for instance was fundamental in the development, leadership, and promulgation of the Iraq Study Group. He has since been involved with Warren Christopher in an important War Powers study report.
For me, Baker was shorthand for a type of national interest-minded Republican, but I certainly should not have said his name — and the thought of James Baker in shorthand terms. . .well, one shouldn’t do that.
The person I should have mentioned (and did) was Nixon Center President Dimitri Simes who along with other Republicans I know will not support Barack Obama. But at the same time, until John McCain’s approach to the Middle East and to other key national security challenges changes, Dimitri Simes — who served as a senior national security advisor to the Romney campaign — will also not support John McCain.
Thus, apologies to former Secretary James Baker — and a salute for his important service to this country — in particular for insisting that George W. Bush hire Robert Zoellick, now World Bank president, into his cabinet as well as the Iraq Study Group and efforts to stabilized Iraq’s debt load in recent years.
I stand by my general comment that while some realist national security Republicans may follow the newly created group of “Republicans for Obama,” numerous others may simply not support either, as is the case with former National Security Advisor Brent Scowcroft — who has stated definitively (despite inaccurate press accounts) that he is advising neither the Obama or McCain campaigns, though he is open to meeting both and sharing his counsel with both sides on an equal basis.
And lastly of course, some key realists like James Baker, Richard Armitage, Henry Kissinger, and others will support John McCain.
— Steve Clemons

9 comments on “James Baker and John McCain: Getting the Story Right”