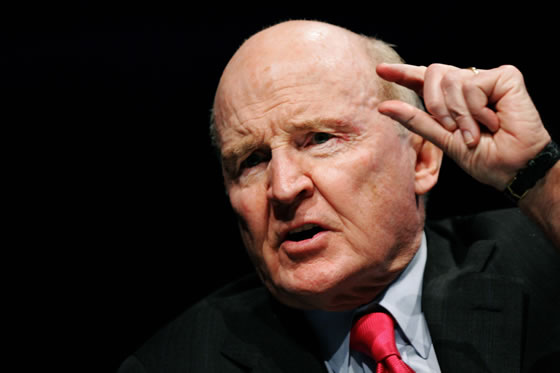 When Bush-McCain super booster Jack Welch issues warnings six weeks before an election, we are all in real trouble — no matter who wins the election.
From a Reuters/Nick Zieminski interview with Welch:

Former General Electric Co. Chairman and Chief Executive Officer Jack Welch said the U.S. economy faces a deep downturn in coming quarters, and he supports a proposed $700 billion government rescue package for the financial sector.
“I now believe we are in for one hell of a deep downturn,” Welch told the World Business Forum in New York on Wednesday, adding that the first quarter of 2009 will likely be “brutal.”
Until recently, Welch said, he had believed the U.S. economy could avoid recession, but he has changed his mind.
“I am now caving,” he said. “Get ready for real tough times. They’re coming. There is no credit available.”
Welch said mortgage lenders, legislators, investment bankers and others are all to blame for the crisis, which stemmed from easy credit and investors’ appetite for yield.
“The problem was money didn’t cost anything,” Welch said. “People took swings.”

— Steve Clemons
Editor’s Note: Thanks to Tahoe Editor for sending this clip my way.

64 comments on “Jack Welch: We are in for a Brutal Time”