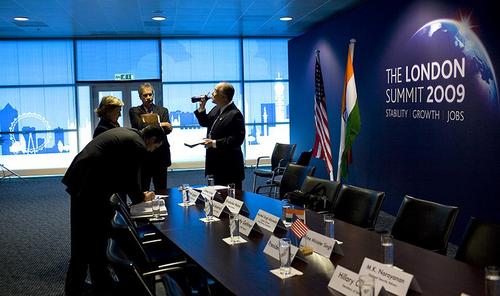 Parag Khanna is a senior research fellow at the New America Foundation and author of The Second World: How Emerging Powers are Redefining Global Competition in the 21st Century.
Many Americans will struggle this week to sort out all of the summits that have become the hallmark of the late September news landscape. Particularly New Yorkers have gotten used to the annual pageantry of the United Nations General Assembly, and more recently the cross-town Clinton Global Initiative, both of which involve heads of state, celebrities, tight security, and grand declarations – and a lot of traffic jams.
The latest entrant in the game of diplomatic musical chairs to shape the chaotic new world order is the Group of 20, whose summit is also taking place this week in Pittsburgh. G20 members represent 80 percent of the world’s population and 80 percent of its economy; half its members are wealthy economies, and half are developing.
It’s been almost one year since the G20 was thrust into the spotlight after Wall Street’s meltdown which threatened to take much of the global economy down with it. The G20 moved to coordinate about $5 trillion in stimulus funding to salvage globalization as we knew it. Over the past year the G20 has also agreed to jointly tackle fair trade, aggressively pursue tax havens, halt creeping protectionism, toughen banking regulation, and equitably reform institutions like the International Monetary Fund. All of this sounds great – except that it repeats a long history of high-table biting off more than it can chew and failing.
The G20’s record is already quite mixed: some tax havens are scared and are playing along, but in other areas G20 members haven’t walked the walk. A month ago its finance ministers declared in London that the world economy is rebounding and they would begin a coordinated phasing out of stimulus packages. Yet some countries like India never really implemented them to begin with – nor has global consumer demand picked up enough to justify the end of intervention to shore up economies in recession.
Additionally, despite siren calls to avoid both trade and financial protectionism, murky measures like the “Buy America” policy and tariffs on emerging market goods are growing – right now most G20 members are coming up with any excuse they can to mark-up Chinese imports.
Finally, French President Nicholas Sarkozy insists on a cap on CEO bonuses, demanding they also be paid out over multiple years, but it’s more likely that other countries will take advantage of him by stealing businesses from France than that the U.S. or Great Britain would go along with such socialist regulations.
For a group that has no legal or treaty basis of any kind, expectations of the G20 are far too high. It is not, as some call it, the “steering committee for the world.” Its great strength is that it is representative, making it in some ways more legitimate than even the United Nations Security Council in which international law is vested, and that it is flexible, able to rapidly convene over an array of issues including the financial crisis and reducing greenhouse gas emissions. But its only weapon to ensure compliance is peer pressure and naming-and-shaming.
As with any diplomatic forum, the G20 has begun to rotate around and around, changing host countries in alphabetical order and staging summits and photo-ops (that can waste about two hours of a one-day summit) once or twice a year. Yet so long as the G20 focuses on flavor-of-the-month issues like executive compensation, and attempts to tackle more issues at once than it can handle, it will prove no better than the UN at harmonizing a world of divergent great powers like America, China, Russia, Brazil and India.
If the G20 wants to succeed where its predecessors like the G7 have failed, it needs to focus on issues that matter to most of its members such as food security, migration, and development finance. The G20s “Sherpas” – the diplomats who pre-negotiate declarations behind the scenes – should be working round the clock on a deal where currency-reserve rich countries like China, Saudi Arabia, and Korea contribute to the IMF, but the IMF ushers in a new global reserve currency to replace the debt-saddled U.S. dollar.
America and the European Union should cut farm subsidies so poor countries can boost agricultural exports, but also reduce wasteful development aid at the same time. On the environment, Western nations should contribute to a climate adaptation fund, while emerging mega-emitters like India must pledge to use that cash to purchase subsidized clean technology to reduce their emissions.
All responsible and influential nations should also contribute troops to a standing international stabilization force which would work alongside the African Union and NATO to create the conditions for failing states to become safe havens for foreign investment rather than terrorists. The key is that a coalition of leading states – from both within and outside the G20 – takes ownership of each of these issues on an ongoing basis rather than waiting for the next summit and resulting vague declaration.
These are the deep, structural challenges that require constant diplomatic focus rather than constantly shifting priorities based on the reigning political whims in G20 members’ capital cities. The G20, as well as private conveners like the World Economic Forum, have joined the UN in the landscape of global governance. But unless their summits show action on updating the underpinnings of global order, no busy New Yorker should be subjected to their diplomatic traffic jams.
(Photo Credit: White House Photo/Pete Souza)
— Parag Khanna

New York, Keith Olbermann and McChrystal’s Afghanistan
Obama to Stephanopoulos: No One Has Pulled a Khrushchev on Me!

3 comments on “Guest Post by Parag Khanna: The Spin Cycle of Summitry”