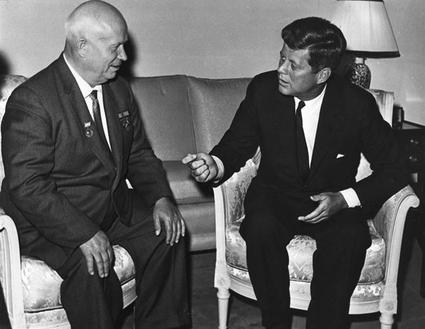 I won’t pull a Joe Wilson in response — but I will suggest that President Obama either doesn’t understand how Nikita Khrushchev “defined” JFK at the beginning of his term or he is stretching things to sidestep an interesting question on the networks this morning.
From my perspective, then Soviet premier Khrushchev pushed Kennedy hard, highlighting doubts about Kennedy’s international commitments and creating a perception of weakness that was reversed only by a nail-biting escalation that nearly resulted in global thermonuclear exchange .
Today on This Week, George Stephanopoulos asked the interesting question of whether any world leader had run circles around President Obama and really surprised him — compelling him to “step up his game.”
I wrote some time ago that Israel Prime Minister Benjamin Netanyahu is Obama’s Khrushchev — and Netanyahu, the head of government of a key American ally, remains the leader who has thus far most challenged Obama and is trying to show the limits of Obama’s international strength.
Strange for an ally to do this — but that is what Israel has done by fighting President Obama, Jim Jones, Robert Gates, Hillary Clinton, and George Mitchell on their collective call for a definitive end to settlement expansion as part of a renewed Israel-Palestine peace process.
We aren’t on the edge of a nuclear escalation like Kennedy eventually found himself, but the stakes for Obama of failing to achieve any breakthroughs in the Israel-Palestine mess, a challenge that he chose as one vital to his administration, are very high and could have serious broader Middle East and global consequences.
So, Obama may not want to acknowledge it — and the contest, sort of a Sumo match, between them is ongoing, but Barack Obama’s Khrushchev moment is with Benjamin Netanyahu.
Obama will be meeting Netanyahu and Palestine President Mahmoud Abbas on September 22nd in New York for a “trilateral meeting” which most believe is substanceless — but could yet be another opportunity for Obama to show that he is either being muscled around by Netanyahu or that Obama is applying some of his own moves.
— Steve Clemons

52 comments on “Obama to Stephanopoulos: No One Has Pulled a Khrushchev on Me!”