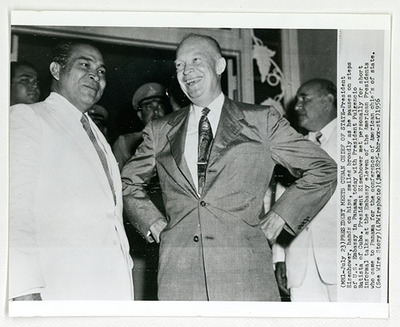 President Eisenhower and Cuban President Batista meet in Panama.
Patrick Doherty directs the New America Foundation/U.S.-Cuba 21st Century Policy Initiative.
One of the most difficult communications challenges for President Obama will be overcoming America’s history of ideological hypocrisy. In his speech in Cairo, Mr. Obama started down this path, recognizing that our own history in the Middle East, such as the invasion of Iraq and the coup against the popularly-elected Iranian government of Mossadegh, was less than stellar. Indeed, whenever the United States has intervened on behalf of democracy and everyday human rights, our efforts have generally made things worse. Iraq, Grenada and Vietnam come readily to mind. The premature elections in Palestine and the failed 50-year old embargo on Cuba are also examples. Democracy is an organic and indigenous political condition and cannot be imposed by intervention or isolation.
Now we are confronted with the reality of a military-backed parliamentary coup in Honduras. The United States, Cuba, Venezuela and many others all condemn the coup and, citing the Inter-American Democratic Charter, call for the restoration of the old president, Manuel Zelaya. Some critics, like my own colleague Andres Martinez, believe that this is the proper reaction.
Of course, nothing in politics is black and white. The problem is that Zelaya was, arguably, himself in the process of making Honduras less democratic and, after he refused to abide by the decisions of the Honduran Supreme Court, the Legislature asked the military to intervene to preserve democracy.
And that explains why Hugo Chavez and Barack Obama are taking the same position on the coup. For Obama, the coup is a breach of the rule of law. For Chavez, the coup is a defeat of a fellow leftist ally who just a few weeks ago in Honduras with Chavez, led an effort to ignore that same Democratic Charter and fully reinstate Cuba into the OAS.
Unfortunately, my friend and colleague, smelling fresh hypocrisy, takes the bait. Regional leaders, the argument goes, cannot have it both ways without ‘rolling back’ democratic gains:

…Some of the very same regional players now urging a united front on behalf of democracy in Honduras are the same leaders who in recent months have been eager to embrace Cuba and give the tropical gulag nation a pass on its lack of democracy and basic civil liberties, citing explicit principles of nonintervention and implicit nostalgia for anti-gringo revolutionary lore.

If this were a debate and if democracy were the main issue facing the people of Latin America, then such arguments would have merit. But the simple fact is that this is not a debate, rather, U.S. policy towards Latin America anchors a tragically dysfunctional relationship. And democracy is far from the top issue, taking a back seat to the hemisphere’s unsatisfied need for economic inclusion and, increasingly, environmental sustainability.
In fact it is the anachronism of ideological purity that hits the wrong note here. Standing up for democracy above all else in Latin America, just like standing up for democracy in the Middle East in recent years, amounted to twisted justification for supporting illiberal, generally right-wing dictators, whether it was Batista in Cuba or Pinochet in Chile. What was needed by the people in Cuba, Chile, in Central America and elsewhere was justice and a measure of peace. But for most of the 20th Century, with almost no exceptions, whether your government was right wing or left wing mattered little; none could deliver what the vast majority of the people so desperately desired.
And the United States cared very little. We supported our dictators with money, guns and spies so long as they stayed on our side in the East-West conflict and kept the oil, bananas and coffee moving north. That was what Containment demanded. We were leaders of the the free world and at the same time paymasters for many of the world’s dictators.
So for the United States to talk about hypocrisy in Latin America rings hollow and misses the point. The task before the United States in Latin America is to restore trust by proving to the people of the hemisphere, in our deeds, that we understand that ideological labels matter nothing if, at the end of the day the people’s basic needs and aspirations are not met.
In the twenty years since the end of the Cold War U.S. policy has failed on that score. Where Latin America has improved, such as in Brazil or Chile, they have done so despite the policies of the United States. But for too many of the region’s people, economic survival is impossible at home and they are forced to migrate to work in the fields and factories of the United States.
What the leaders of the region have now told President Obama is simple: you say you want a new relationship with the Hemisphere. So do we. First, however, you must prove to us you have changed, that you will no longer treat Latin American nations as your playthings. And the test will be Cuba. End the embargo and we will talk.
Hypocrisy in Hemispheric relations is nothing new and the United States has for decades been the most prolific purveyor of such hypocrisy. What is needed is proof, in concrete actions, that the era of American hypocrisy is over. Standing up for the rule of law in Honduras is fine and good. But it is important here to realize that getting the speck out of our neighbor’s eye is secondary to getting the plank out of our own.
— Patrick Doherty

Back to Rome
Honduras’ Military Coup Tests the Obama Administration