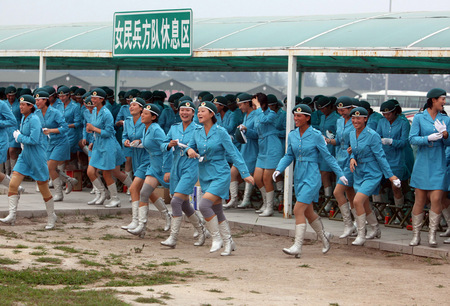 Oliver Lough is a research intern at the New America Foundation.
China’s 60th birthday was celebrated in elaborate and wonderfully old-fashioned style by the thousands of carefully choreographed performers (and pieces of military hardware) that congregated in Beijing’s Tiananmen Square this morning.
So carefully controlled was the event that its organizers had spent the preceding weeks persuading the local residents, wildlife, and weather to stay away, lest they mar proceedings with some uninvited display of spontaneity.
Ever since the buildup to the Olympics, it has seemed as though China has constantly been on the brink of one major event or anniversary or another – the games themselves, the 30th anniversary of Deng Xiaoping’s reform movement, the Tiananmen ‘event,’ a 60th birthday… This catalogue of significant moments looks set to stretch on practically indefinitely, with next year alone already cluttered with Shanghai’s Expo and the 50th anniversary of Tibetan ‘liberation.’
On the surface of it, there are worrying signs that the state has worked itself into the habit of using such events as a convenient pretext to curtail the liberty of its population, especially where freedom of speech and of the press are concerned. The evidence is compelling: popular websites blocked, human rights activists detained, and the press on an ever tighter leash.
But if things were that simple, this article in the Chinese Southern Weekly newspaper would never have been written. Commissioned in the run-up to the state’s birthday celebrations, “What Can My Country Do For Me,” is a series of pithy comments by Chinese citizens on where they feel their country is going, and how it could do better. The vast majority is pretty generic stuff, with any criticism kept well within accepted bounds. But look at how it kicks off:

“Miu Jianwen, Lawyer, Shanghai
I hope that whenever I have to go to a government agency to deal with something, I don’t have to rely on some former colleague or old friend to get anything done. I hope that one day judges in our courts will actually act like real judges; I hope I never again have to experience a judge bellowing “don’t talk to me about the law!” in my face. I hope the victories I win for my clients will one day be reflected in action, instead of becoming worthless pieces of paper that seem that seem to ridicule the entire legal profession for its impotence. I hope that when the central and local rules of law enforcement are meant to be one and the same, they are. I hope that the regulations issued by our government will emerge far-sighted, well-thought-out, and consistent with logic, legal principle and basic grammar. If these things come to pass, I’ll be able to take a little bit more enjoyment away from my work.
Xu Zhiyong, Beijing, University Professor [and legal advocate]
I hope that one day, the power of our state will work exclusively for the well-being of all. I hope that the law will come to represent equality and fairness, and that corruption and special interests will no longer have the space to exist. I hope that the fundamental freedoms and rights of every citizen will be guaranteed by law, in the eyes of which all will be equal…I hope that prejudice and indifference between town and country will disappear, that hatred and enmity between rich and poor will vanish, and that even our nation’s poor will be able to live out dignified and respectable lives.

A little background: China’s lawyers have taken an absolute hammering this year. Increasingly, those that take on sensitive cases are having their licenses revoked, being physically threatened, and often end up subject to legal investigation themselves.
Earlier this summer, an internationally acclaimed legal NGO in Beijing was shut down on the flimsiest of pretexts, and its founder arrested. His name? One Xu Zhiyong.
It is perhaps a little counterintuitive to see cause for optimism in all this, but the fact that a man who spent most of his summer languishing in prison for sailing too close to the wind on sensitive issues is now criticizing the state in a well-established newspaper on the eve of National Day is hugely, hugely heartening.
It’s struck me that the less all-pervasive China’s infringement on the freedom of its citizens has become, the more outrageous its periodic interferences have started to seem. Xu and his colleagues are having a terrible time, and laying some justifiably scathing criticism at the feet of their rulers, but not so very long ago (and we’re talking 5-10 years, here), this entire scenario would have been unthinkable.
Happy 60th birthday, China. May you continue to surprise.
— Oliver Lough

2 comments on “Guest Post By Oliver Lough: A Sexagenarian Mess of Contradictions”