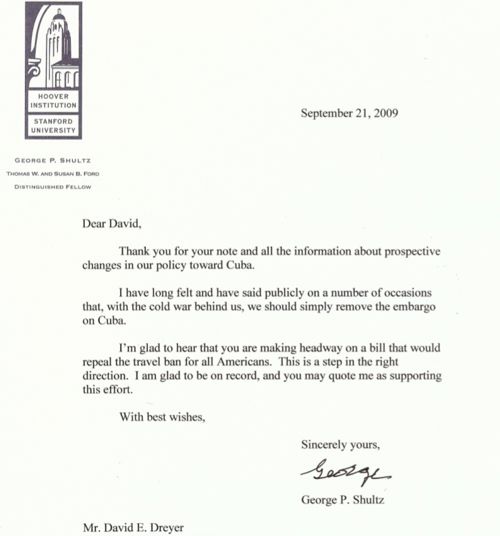 Former Reagan Administration Secretary of Treasury and Secretary of State George Shultz thinks that the US embargo against Cuba should “simply be lifted.”
In a letter issued by Secretary Shultz to David Dreyer and the Center for Democracy in the Americas, Shultz writes (pdf available here):

I have long felt and have said publicly on a number of occasions that, with the cold war behind us, we should simply remove the embargo on Cuba.
I’m glad to hear that you are making headway on a bill that would repeal the travel ban for all Americans. This is a step in the right direction. I am glad to be on record, and you may quote me as supporting this effort.

Shultz echoes sentiments offered by former National Security Advisor Brent Scowcroft who has stated that the US-Cuba embargo makes no sense in foreign policy terms.
Shultz’s views are not exactly new as he said that American sanctions against Cuba were “ridiculous” on the Charlie Rose Show in April 2008. His comments were not as widely reported as they should have been at that time, however.

I think our policy of sanctions against Cuba is ridiculous.
During the cold war it made sense because it was a Russian base. They used it for flying spying missions, and so on, but that’s over. And all we do by our sanctions is allow Castro, and now maybe his brother, to blame the problems of Cuba on us.
And at the same time I think particularly now that there’s some transitioning of some kind probably coming about, we’re much more likely to get a constructive outcome if there’s a lot of interaction. And to try to prevent interaction under these circumstances, I don’t think is sensible.
— former Secretary of State George Shultz interviewed by Charlie Rose, 4/24/08

President Barack Obama invited George Shultz two weeks ago to join him along with Henry Kissinger, former Defense Secretary William Perry, and former Senator Sam Nunn to observe Obama chairing a Security Council Meeting at the United Nations on the subject of nuclear non-proliferation and arms control.
I watched President Obama greet Shultz and the other world leaders and special guests — and it was obvious to me sitting in that chamber that President Obama connected with George Shultz and valued his presence that day.
The Obama national security team should take stock of George Shultz’s views on the only part of the Cold War that managed to get colder during the Bush administration and do much more to thaw the ice in this hemisphere.
The US-Cuba embargo undermines America’s position in the world. Everyone knows this. Barack Obama knows this.
There will be a vote in a couple of weeks in the United Nations that has practically become ritual. About 185 nations will vote against the US, Israel, and one or two of our island protectorates on the US embargo of Cuba.
It’s time to end America’s isolation on this anachronistic stand that mattered perhaps in the 1960s, if then, but definitely is “ridiculous” today.
— Steve Clemons