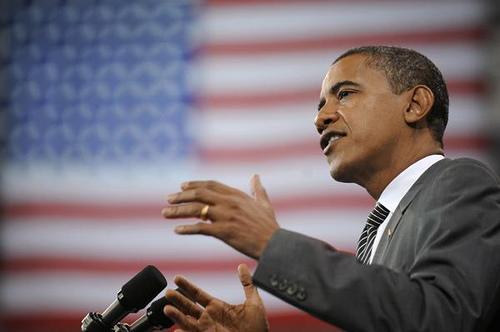 Forget the Chicago Olympics foul up. Barack Obama has just been awarded the Nobel Peace Prize — the first sitting US President to win the Prize since Woodrow Wilson.
The Nobel citation reads:

The Norwegian Nobel Committee has decided that the Nobel Peace Prize for 2009 is to be awarded to President Barack Obama for his extraordinary efforts to strengthen international diplomacy and cooperation between peoples. The Committee has attached special importance to Obama’s vision of and work for a world without nuclear weapons.
Obama has as President created a new climate in international politics. Multilateral diplomacy has regained a central position, with emphasis on the role that the United Nations and other international institutions can play. Dialogue and negotiations are preferred as instruments for resolving even the most difficult international conflicts. The vision of a world free from nuclear arms has powerfully stimulated disarmament and arms control negotiations. Thanks to Obama’s initiative, the United States is now playing a more constructive role in meeting the great climatic challenges the world is confronting. Democracy and human rights are to be strengthened.
Only very rarely has a person to the same extent as Obama captured the world’s attention and given its people hope for a better future. His diplomacy is founded in the concept that those who are to lead the world must do so on the basis of values and attitudes that are shared by the majority of the world’s population.

This is great news. There are some who will argue that a build up of forces in Afghanistan, unresolved efforts in Israel-Palestine, and a lot yet to do with regarding to changing Iran’s course make this Prize seem premature.
But the reality is that this Prize puts some air back in the Obama Bubble — and this is good for the country and world as the challenges in the international system are enormous today.
Obama’s efforts to talk the world into a better place have indeed created opportunities that were hard to imagine during the Bush administration — but now a lot of heavy lifting and deal-making are required, and the Nobel Prize will give Obama a boost in these efforts.
Congrats to the President.
— Steve Clemons