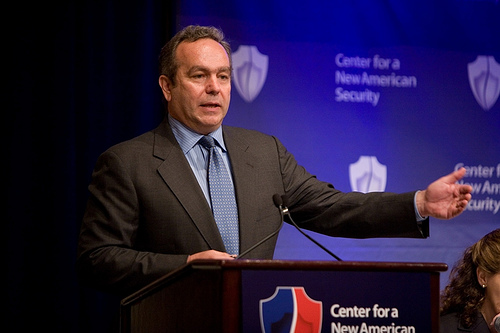 Center for a New American Security Co-Founder and CEO Kurt Campbell has finally been sworn in today as Barack Obama’s Assistant Secretary of State for East Asian Affairs, the position most recently held by the newly appointed US Ambassador to Iraq Christopher Hill.
Senator Sam Brownback had a hold on Campbell for a very long time — and I was working on a blog post preparing to blast the Kansas Senator for his irresponsibility in holding up this nomination and for allowing a simmering cauldron on the Korean Peninsula to near dangerous levels without an Asst Secretary of State in place to focus attention on what was going on there.
Fortunately, I no longer need to do this — and Campbell, whose spouse is the Under Secretary of Treasury for International Affairs nominee Lael Brainard, can now give the misbehaving North Korea leadership some of the American attention it craves so much.
North Korea will continue to be a mess — but it is vital to have someone focused on what is really happening there. I have been a fan of some of our Korea handlers in the past — like Evans Revere who now heads the Korea Society in New York, Ambassador Stephen Bosworth who heads the Fletcher School at Tufts and is now a part time North Korea envoy, Christopher Hill who is now in Baghdad, and now Kurt Campbell.
This is a vital region that more than anything else needs high level American attention and involvement — and until this swearing in ceremony today of Kurt Campbell, the Obama administration was not giving enough of either.
— Steve Clemons

What Kind of Relationship Is Possible Between Moscow and Washington?
Greetings Senator Franken!

6 comments on “FINALLY. . .Kurt Campbell Sworn in to Deal with Asia”