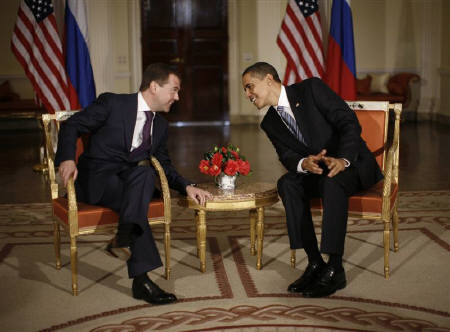 As President Obama prepares to visit Russia next week, Columbia University‘s Robert Legvold has a thought-provoking article on the state of U.S.-Russia relations in the current issue of Foreign Affairs.
Legvold helpfully identifies current U.S. policy as “selective engagement and selective containment,” while advocating a new framework for the relationship that includes ambitious goals on nuclear non-proliferation, regional security, and energy security.
Legvold explicitly places himself alongside Anders Aslund, Andrew Kuchins, Thomas Graham, and Steven Pifer within what I would call the “realist” camp of Russia analysts, who believe that a new strategic relationship with Moscow based on mutual interests is possible. (I would include Dimitri Simes, Dmitri Trenin and Nikolas Gvosdev in this group as well.)
Legvold offers two reasons why the time is ripe for a renewed effort to improve relations: new leadership in Washington and the onset of the economic crisis, which he suggests is likely to lead to more restrained Russian behavior.
The idea that a sustained economic slowdown will limit Russia’s foreign policy options certainly makes sense, but I would be curious to know what Legvold thinks of arguments made by Stephen Sestanovich and others that Moscow’s aggressive posture toward Washington is such an essential part of the Putin-Medvedev-led oligarchy’s legitimacy that it cannot be abandoned.
On the issues at the heart of the U.S.-Russia relationship, Legvold’s argument in favor of collaboration is most persuasive when he addresses the issue of nuclear non-proliferation. This is an area in which both sides have a real and stated interest in working together both to reduce their own arsenals and to prevent proliferation.
On Iran’s nuclear program, he suggests that Washington should seek a deal that either allows Tehran to have a nuclear-cycle capability under strict IAEA inspections or an arrangement by which Iran joins an international fuel-service center. Either way, Legvold makes a good point that Russian cooperation is vital and depends on Washington proposing a deal that Tehran can accept. Russia is not going to help Washington coerce Tehran, but may use its leverage as Iran’s primary supplier of nuclear equipment to help Tehran get to “yes” on a broader deal.
His calls for a dialogue on the future of Afghanistan and cooperation on transnational threats such as terrorism, drug trafficking, and cyberattacks also make sense.
But while Legvold’s argument is dispassionate and cautious in tone, I find his analysis a bit optimistic at times. For instance, he says that

There is no logical reason why the two countries with the lion’s share of the world’s nuclear weapons cannot create a tighter regime to shrink their own arsenals and pave the way toward arrangements that render safer the programs of other nuclear powers, why the world’s largest energy producer and its largest energy consumer cannot fashion a genuine energy partnership, why they cannot work together to mitigate the instability in and around the vast territory of the former Soviet Union, or why they cannot collaborate to ease the integration of rising powers such as China and India into a revamped international order.

This is an ambitious agenda indeed – and to be fair, Legvold cautions that “these goals may not be imminently attainable.” Still, some level of cooperation in these areas is necessary if these issues are to form the basis of a strategic partnership, as Legvold proposes.
On the energy issue, it is true that both Russia and the United States benefit from a predictable flow of energy at stable prices, but Legvold fails to tell us what a bilateral strategic energy partnership could accomplish. Energy security is an issue that cuts across many of both Washington’s and Moscow’s strategic relationships and seems like an area where Moises Naim‘s concept of “minilateralism” applies.
And while both Washington and Moscow certainly have an interest in a stable post-Soviet space, I am curious whether Legvold would recognize (implicitly) a Russian sphere of influence in that space. If he would not, then it seems that competition rather than cooperation is likely to characterize this aspect of the relationship for the foreseeable future.
Similarly, the issue of how to incorporate China and India into the international system deserves to be addressed between Moscow and Washington at the highest levels, but this seems like an issue where the two sides’ interests might diverge at least as much as they converge.
Finally, it would be interesting to know how Mr. Legvold views Russia’s likely trajectory over the medium to long-term. Whether Russia’s dysfunctional political and economic systems can evolve to meet the needs of the Russian people and provide the resources necessary for an active international security role remain questions to be answered – and surely the answers have profound implications for what Washington’s policy toward Moscow should be.
(For a fascinating Russian perspective on Russia’s medium-term outlook, reference “The World Around Russia: 2017.”)
Overall, Legvold’s analysis is refreshingly even-handed and his suggestion that dialogue on these difficult issues can lead to trust and incremental progress over time is persuasive – but he is most certainly correct when he says that achieving real substantive progress will be difficult.
— Ben Katcher

Showdown in Tegucigalpa
FINALLY. . .Kurt Campbell Sworn in to Deal with Asia

23 comments on “What Kind of Relationship Is Possible Between Moscow and Washington?”