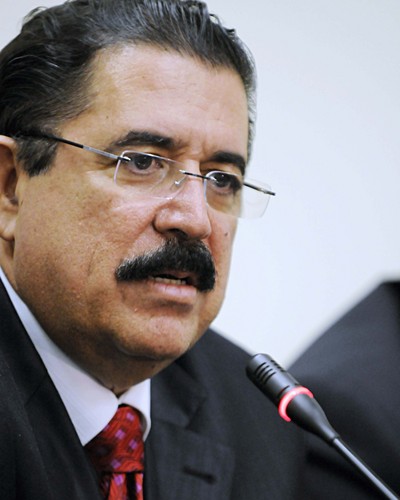 Recently ousted President Manuel Zelaya of Honduras has vowed to return to his country this weekend to reclaim his position as President of the Republic. Zelaya will be escorted by an unrivaled posse of regional leaders, including Cristina FernÃƒÂ¡ndez de Kirchner of Argentina and Jose Miguel Insulza of the Organization of American States (OAS), to ensure he is peacefully reinstated. Zelaya and his supporters are in for quite a showdown as hardened resolve awaits them in Tegucigalpa.
Roberto Micheletti, the new, temporary, or illegal (take your pick) president of Honduras was interviewed on Univision last night and calmly, but firmly defended the actions of his nation’s military which he insists was under the direction of the Supreme Court. With hardened resolve Micheletti vowed to arrest Zelaya upon his return for his flagrant crimes against the constitution.
I’d like to offer a quick recap of the crimes Zelaya is charged with committing against the Honduran Constitution. The current version of the Honduran Constitution was written just as the country emerged from twenty years of dictators and military rule and it includes an article (374) specifically prohibiting any attempt to alter presidential term limits. Zelaya’s referendum was an attempt to gain popular support for constitutional alteration of term limits. Article 373 of the Honduran constitution lays out the way in which the constitution can be altered and that is through the National Congress, not through referendums. When Zelaya’s referendum was declared unconstitutional by the Congress and the Supreme Court he ordered the head of the army to assist him in carrying out this election. The head of the army refused and was immediately fired by Zelaya; unfortunately for Zelaya the head of the army can only be removed from office by Congress (article 279).
Despite these charges Zelaya is encouraged to reclaim his presidential position by a unanimous UN resolution condemning the coup d’ÃƒÂ©tat and demanding Honduras unconditionally reinstate him as president. The OAS issued a similar statement this morning in which they threatened to suspend Honduras’ membership if Zelaya wasn’t reinstated in 72 hours.
And so the showdown begins. On one side we have Zelaya backed by the international community and on the other is the government of Honduras backed by the majority of its 7.5 million citizens; an unfair fight for sure. According to Honduras’ new president, the country will not reinstate Zelaya unless pressured by military force. The only party to have threatened said force is Venezuelan president Hugo Chavez who has happily injected himself into the center of the Honduran crisis playing the role of champion for democracy. Would Latin America allow a Venezuelan military invasion to re-seat an unpopular lame duck president? Doubtful.
That leaves economic and political pressure as the strongest negotiating tools. The resolve of the Honduran government may be able to withstand temporarily losing its membership in the OAS, but their economy is in no condition to withstand harsh economic sanctions. The Obama administration has condemned the coup, but they have yet to impose economic sanctions or withdraw U.S. ambassadors from Honduras as other regional leaders have. Latin America waits to see if President Obama will apply the added pressure to Honduras and I’m sure Obama wishes he didn’t have to take a stand for a leader such as Zelaya.
I’ll be following the situation in Honduras as it unfolds.
— Faith Smith

America’s Effective Unemployment Rate at 18.7%?
What Kind of Relationship Is Possible Between Moscow and Washington?

40 comments on “Showdown in Tegucigalpa”