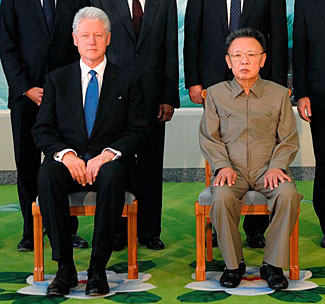 Senate Foreign Relations Committee Chairman John Kerry might have brought Senatorial gravitas to the US-North Korea relationship and have opened connections for Pyongyang beyond the White House. Al Gore, if he had gone to help secure the release of journalists Laura Ling and Euna Lee from the hard labor camp where they have been incarcerated, would have diversified his public profile. New Mexico Governor Bill Richardson, had he gone, would have added to his somewhat legendary roster of successful engagements with global thugs to try and secure the release of innocent people from the trap of hard-edged international tensions.
But Bill Clinton, who is today in North Korea, ignored potential landmines and surprisingly took on the challenge of engaging North Korea to win the release of these journalists. For his efforts, Clinton will most likely reap significant political credits with Barack Obama and his team — not just for pulling a Bill Richardson and getting the woman out of the hole they were in — but for steadying a US-North Korea relationship that was in a fast downward spiral. 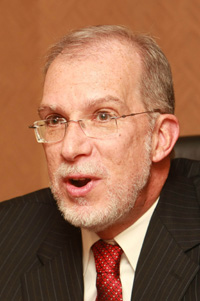 As for State Department official and Korea Society President Evans J.R. Revere told me today, sending Bill Clinton was a significant “High Risk, High Reward” strategy for both Barack Obama and Clinton himself. Although everyone goes to great pains to state that Clinton’s trip was a private trip, everyone — particularly North Korea premier Kim Jong Il — knows that the trip had both Obama’s support and Hillary Clinton’s.
Revere, who has been engaged in some private diplomacy himself with the North Koreans about the two journalists, felt that Clinton had the most to lose from this trip among all of the other potential unofficial envoys — and also the most to gain for American policy overall. The North Koreans could have embarrassed the former President and could have engaged in some unsavory behavior to continue to show how they wished to defy the international community’s demands. But Kim Jong Il, pictured with a wide smile in photos next to the more solemn Clinton, rolled out the red carpet for the President and seemed extremely pleased with Clinton’s outreach.
Evans Revere, who used to manage the North Korea portfolio at the State Department, has been working quietly over the past several weeks with the North Koreans from his Korea Society perch in New York to encourage them to resolve the journalist issue quickly. He reported to me that he had a number of “intense and useful, even positive, exchanges” — the results of which he had shared with the administration. Revere protege David Straub — who also used to be at the State Department — is traveling with Bill Clinton. Center for American Progress President and former Clinton White House Chief of Staff John Podesta is also on the trip. Evans Revere was also in constant touch with one of the family members of one of the imprisoned journalists.
Given the spade work done by a number of players — through formal and informal channels — Bill Clinton has now secured pardons from Kim Jong Il for the two journalists who he has now met with — but more importantly, Clinton has engaged directly with North Korea President Kim Jong Il and this may steady things in Northeast Asia for a bit.
As one observer told me today, engaging Kim directly matters and prevents the complex filters around him from distorting and derailing earnest efforts to get the relationship pointed in a more constructive direction. Former Japan Prime Minister Koizumi learned this through two direct meetings with Kim, and the Chinese and South Koreans also have learned that direct engagement with the North Korean leader produces radically different results than dealing with the bureaucratic minions around him.
Clinton may have just given North Korea a “face-saving way” back to negotiations in the Six Party Talks — and North Korea may have found a valuable informal back channel to both President Obama and Secretary of State Clinton to partially sate its own yearning for direct bilateral talks with the United States that America can’t endorse given other stakeholders in Northeast Asia committed to a six party process.
And by the way, John Bolton, political market indicator that he is, is on the verge of another apoplectic fit, which generally means that the Obama White House is on a good course.
— Steve Clemons