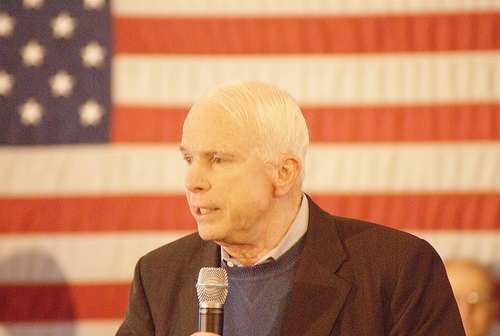 I’ve not been all that excited about the McCain “I don’t know how many houses I’ve got” gaffe.
I know others who aren’t tuned into such details and they’d make fine national leaders. One can be out of touch with a lot of things — numerous homes, paying bills on time, remembering to put gas in the car, knowing which drawer the kitchen utensils are in (that’s one of my regular screw-ups), and so on.
But Rogue Columnist captures the beyond-home implications of the gaffe that we should be concerned about:

President-elect McCain’s inability to recall how many houses he owns fits into a larger and more troubling pattern. The problem is not just that he is an out-of-touch rich guy.
This is the candidate who repeatedly confused Shiite and Sunni — all the while trumpeting his expertise on the Middle East. At one point, his sock puppet Joe Lieberman had to whisper the facts in his ear. He couldn’t tell Sudan from Somalia. He kept talking about a nation that hasn’t existed for years. Iraq and Pakistan share a border, the senator wrongly said, and the Sunni awakening happened ‘after’ the surge (edited out by CBS). He said he didn’t know much about economics, then denied saying such a thing. He spoke of a withdrawal timetable one day, then denied saying it later. He volunteered Cindy for a topless contest. Then there was the stupendous dead space and mumbling when he was questioned about claiming Obama was playing the race card. He claimed he walked through Baghdad without body armor or protection, etc., etc. Most of this has been captured on tape.
What’s going on? Neither obvious answer is comforting. He’s either going senile as he nears 72, or he’s lying and unprepared on critical issues without realizing how easily this can be caught in a YouTube era. (Whether the duhs and ignos — those ‘undecided voters’ and angry Clintonites — will care, is another, depressing matter). Either one of these answers should disqualify him for the White House, particularly because so many of his misstatements, confusions and subsequent lies come about issues where he claims superior experience and judgment.

I turn 46 on Wednesday next week — during the Democratic National Convention — so I’m feeling particularly vulnerable to age challenges. I don’t care if McCain is 72. I care whether he is functioning mentally, intellectually, and emotionally in full form.
This is a candidate who has already decided that Russia is the dark villain and Georgia’s Saakashvili the white knight in the scrape-up between Russia and Georgia. In that case, did he talk with his advisers to make sure that he had his facts straight and intelligence right? Wait, one of his top national security advisers is a paid lobbyist for Georgia. . .so, let’s change that to “Did McCain ask his biased staff members to recuse themselves and then ask others to help him get his facts straight?’
Or did he just decide what was what all on his own when he issued his condemnation of and not so veiled threats toward Russia?
I don’t care if folks see the Georgia-Russia mess as a black and white situation or a problem with lots of gray, if McCain is making fast judgments but often has a poor grasp of detail. . .and let’s put some “emotional outbursts” on top of that. . .then that’s not a trivial problem.
— Steve Clemons