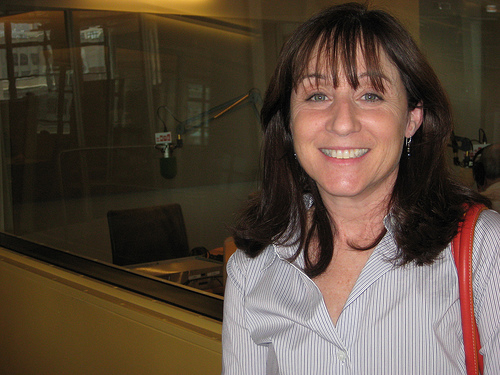 I have the privilege of moderating a book salon forum today over at FireDogLake with New Yorker Washington correspondent Jane Mayer on her best selling book, The Dark Side: The Dark Side: The Inside Story of How the War on Terror Turned into a War on American Ideals.
This is an online forum. I did another of these at FireDogLake once with Jacob Heilbrunn on his book, They Knew They Were Right: The Rise of the Neocons, and it was a fantastic discussion.
If you would like to watch a previous meeting that I hosted with Jane Mayer, this is a pretty great interview:

This is the preamble commentary that will run later on the FireDogLake site:

New Yorker Washington correspondent Jane Mayer achieved a great first among serious Bush administration-watchers in putting a major spotlight on the deeds of David Addington, Vice President Cheney’s Chief of Staff and former national security advisor.
She wrote her pivotal New Yorker profile piece of Addington called “The Hidden Power” in July 2006 – but even this great expose came years after some of Addington’s most serious and disconcerting achievements including the assertion of a war-time imperial presidency that ignored and had disdain for checks and balances in government.
Addington helped construct the legal environment that the White House used to embrace torture as a technique of detainee interrogation. Washington Post national security columnist called Addington “Cheney’s Cheney.” David Addington is perhaps the most powerful political operative in Washington today about whom very little is known.
Jane Mayer will be joining FireDogLake’s book salon this afternoon to talk about her new acclaimed and best-selling book The Dark Side: The Inside Story of How the War on Terror Turned into a War on American Ideals.
This book is in many ways the expanded, richly detailed, investigative journalistic account of the Bush administration’s manipulation of the national security bureaucracy to embrace practices of torture and governance that are the antithesis of core American values and democracy itself.
She delves into Dick Cheney’s high-decibel paranoia after 9/11, and the cowardice of Alberto Gonzales in knocking back the politically intimidating Cheney team when key principles were being debated. She reveals detailed Red Cross findings on the application of torture techniques to the CIA’s top fourteen terror suspects.
The book that Jane Mayer has written gives us a snapshot of American government and an American presidency at its ugliest.
And this is an ugliness that we must explore and look at – and understand how it happened. Jane Mayer will be with us this afternoon to chat with FDL readers and readers of other blogs (like The Washington Note) about this important exploration of power, war, presidential abuses, and torture.
— Steve Clemons

Feel free to join us at 5 pm EST after the big Obama-Biden show in Springfield, Illinois which we’ll be watching closely as well.
— Steve Clemons