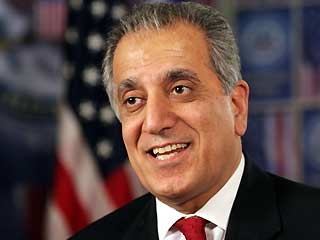 Helene Cooper’s scoop that former US Ambassador to the United Nations Zalmay Khalilzad is working to arrange a deal with Afghan President Hamid Karzai to serve as “CEO” of Afghanistan is fascinating — but also troubling.
I like Khalilzad, who was potentially a candidate for the presidency of Afghanistan but missed a recent filing deadline for the race and who also repeatedly denied to others and me that he would pursue this course. However, when I interviewed Khalilzad in January of this year, he said he was working on something that would involve him in Afghanistan’s future.
Now we know what sort of deal he was thinking about.
It’s not clear how a President and a CEO, that is unaccountable to any part of the elected Afghan government, would function — but Cooper’s New York Times report implies that both President Obama and Secretary of State Clinton have ‘not objected’ to the idea and have not expressed concerns other than saying that this needs to be a decision made by Karzai.
Khalilzad brings considerable deal-making strengths and has a good understanding of both the downsides and upsides of serious nation-building efforts.
Obviously, the downside of Khalilzad’s potential next job is that it further undermines the “democracy narrative” that many want to cling to as a justification for America’s deep engagement in Afghanistan. Such a move to create a national CEO — that is rife with potential political challenges and uncertainties as to how it would work — is nonetheless not really part of a larger democratic governance message.
But count me as one intrigued and cautiously optimistic.
Khalilzad’s role in Afghanistan could benefit from having a foot in the US political system, a foot in the Afghan system, and a foot in the world of transnational diplomatic and aid institutions.
That’s three feet, but Khalilzad has managed three-footedness before.
For those interested, a short interview and discussion I had with Zalmay Khalilzad in January of this year is here:
A longer version of a New America Foundation discussion I had with him in January 2009 is here.
— Steve Clemons