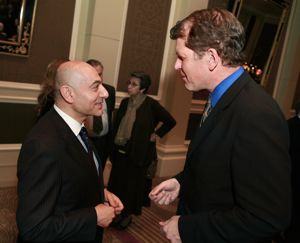 New America Foundation foreign policy programs director Steve Clemons and Ambassador of Syria to the United States Imad Moustapha (photo credit: Zain Ali Shah)
Yesterday evening, I wanted to pay my respects to a fellow blogger and lover of the arts, Imad Moustapha – who also happens to be the Ambassador of Syria to Washington.
I got a snapshot at that Mandarin Hotel party of what incredible impact Barack Obama has had in Washington.
In a Harry Potter sense, Syria has for nearly a decade been “the nation whose name could not be spoken.” We have had walls dividing our diplomatic efforts within Washington — and in my view it’s time that we re-read Barack Obama’s tremdendous campaign-presented speech “A World Without Walls” and try to live that sort of reality within Washington itself.
And it’s beginning to happen.
Wolf Blitzer, anchor of CNN’s Situation Room, stayed for a great long time and met not only Moustapha and his entourage but many others at the party. And then — punctuating the change in the DC game — Acting Assistant Secretary of State for Near Eastern Affairs and former US Ambassador to Lebanon Jeffrey Feltman was there, along with State Department Middle East watcher Nicole Shampaine and Frederic Hof — who is staffing George Mitchell’s Middle East efforts.
Amazing actually. This is a dramatic change in tone and posture since the departure of the George W. Bush administration.
Others at the party were the Boston Globe‘s Farah Stockman, CNN’s Elise Labott, Ambassador of Yemen to the US Abdulwahab Abdulla Al-Hajjri, Middle East Institute President and former US Ambassador to Pakistan Wendy Chamberlain, Algerian Ambassador to the US Abdallah Baali, New School professor Alon Ben-Muir, former Colin Powell State Department Advisor and now AAAS International Programs czar Norman Neuriter and his AAAS international policy colleague Vaughn Turekian, and many other interesting journalists, think tank types, and then those trade association, lawyers and consultants looking to cash in on the rapidly changing Syria-US tone.
Also enjoying the scene were the Ambassadors of Turkey, Iraq, Lebanon, Morocco, Quatar, Oman, Malta and Lybia, as well as Charge D’affairs of Jordan, Saudi Arabia, and Bahrain.
— Steve Clemons
Editor’s Note: Friday Lunch Club has more.

Burns, Brzezinski and Hagel to Speak at “US-Saudi Relations in a World Without Equilibrium” Conference
Saudi Minister of Finance to Speak at NAF/Middle East Policy Forum in Washington

One comment on “Wolf Blitzer and Jeffrey Feltman at Syria National Day Reception?”