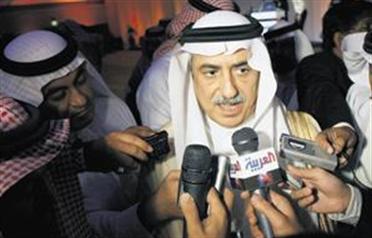 Saudi Minister of Finance Ibrahim Al-Assaf has just agreed to appear in a major national policy forum that the New America Foundation/American Strategy Program is helping to organize on Monday, the 27th of April in Washington, DC.
I previously announced that former Saudi Ambassador to the US and former Saudi Intelligence chief Prince Turki Al-Faisal as well as former Ford and George H.W. Bush National Security Advisor Brent Scowcroft were on the list of headliners for this conference, which will take place in Georgetown.
The meeting is titled “US-Saudi Relations in a World Without Equilibrium.”
Finance Minister Al-Assaf will be attending the spring meetings of the International Monetary Fund and World Bank and participating in follow-on discussions from the London G-20 Summit about broadening the resources of the IMF for financially-weakened developing economies.
This meeting was initiated by a group I run at the New America Foundation and is being co-organized by the Comittee on International Trade of the Saudi Chambers of Commerce.
One of my personal objectives in asking various Saudi government officials to speak at this conference is to begin to bring the US-Saudi relationship more into the active mainstream of discussion in Washington policy circles. There is a tendency to hide the importance of the US-Saudi relationship because of discomfort with cultural dissimilarity, frustration with oil dependence, and real differences between the countries on many fronts. However, there is also a long history of Saudi support of the US and its foreign policy and economic objectives in the world, a long history of Saudi youth studying at American schools and universities, and other bridges as well.
There are strengths and weakness to any relationship — and given the fact that the world and how it organizes itself has become more wobbly than used to be the case — the behavior, objectives, and strategies of most significant global players — including the US and Saudi Arabia have changed. It’s time in my view to have more open discussion about the policy challenges facing the countries — in bilateral, regional/Middle East, and global terms.
This conference will STREAM LIVE on the internet here at The Washington Note from 8:45 am until approximately 4:00 pm EST. I hope many of you can join us.
More on the rest of the line-up and general schedule soon,.
— Steve Clemons