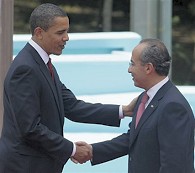 Today is a big day for Mexico City. President Obama’s overnight stay is the first visit from a U.S. President since Clinton’s two-day stopover in 1997. Really; it’s been twelve years since the President of the United States has visited the capital of Mexico. It’s no wonder the new administration has to work overtime to mend this special relationship. While I understand that President Bush was quite occupied with major events on the other side of the world, a neighborly visit would have been nice (and convenient from Crawford, Texas). I acknowledge the history of U.S. intervention in Latin America is less than stellar; at times appalling. So being ignored by President Bush has been considered a positive by many in Latin America, but I propose that we needn’t choose between a bad relationship with Mexico and a non-existent one. Obama’s challenge is to create an entirely new framework for U.S.-Mexican relations specifically and Latin America in general.
The Obama administration has approached the U.S.-Mexican relationship and the crisis affecting our shared border with an appropriate sense of urgency. Secretary of State Clinton laid the groundwork for real cooperation in her visit last month. She verbalized what few U.S. politicians have previously been willing to say, that U.S. drug use and demand are significantly to blame for Mexico’s current drug crisis. Clinton declared that the United States shared a co-responsibility for the drug war and vowed to stand “shoulder-to-shoulder” with Mexico in defeating the drug lords. Her words represent a new approach toward Mexico that I see as an excellent step in addressing the crisis. Mexico City is not in a position to beat the drug lords on their own and the U.S. cannot influence this fight without a posture of cooperation.
Secretary of Homeland Security Napolitano followed Clinton’s vows for partnership and action by appointing Alan Bersin to the position of Border Czar. Bersin is responsible for coordinating the U.S. and joint response to illegal arms and drug flows, as well as curbing the flow of illegal immigrants. Napolitano has also taken swift action in beefing up security along the border to stem the north and south flow of illegal traffic.
The agenda for Obama’s visit is relatively simple: demonstrate support for the Mexican Government. There is much negotiating to take place between the U.S. and Mexico on NAFTA, immigration, and the economy, but thanks to the leg work provided by his diplomatic and national security teams, President Obama can use this visit to strengthen this important bilateral relationship. And Obama’s Mexico visit is a cornerstone of his ambition to reconnect the United States with Latin America in a mutually beneficial way.
For further reading on the dysfunctional relationship between the U.S. and Mexico I recommend a series of articles released this week by The New America Foundation and Slate Magazine.
— Faith Smith

7 comments on “The Obama Administration and Mexico”