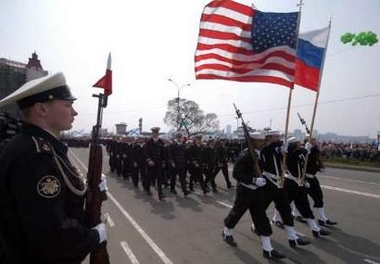 In their article “Wrong on Russia” published today in The National Interest, Flynt and Hillary Mann Leverett follow a thread I began yesterday on US strategy towards Georgia. The Leveretts, along with a number of others Steve Clemons has mentioned (here, here, and here), are skeptical of both Presidential campaign’s approaches to Georgia and Russia as they commit the fundamental error that has led this administration down treacherous paths — failure to strategically prioritize relationships and objectives in the region. There should be no doubt that the tangible security deliverables a strong relationship with Russia can offer are far more valuable than anything Georgia’s dubious democracy purports to uphold.
The Leveretts lay out Russia’s role in the global order and value to the United States:

As Washington contemplates future relations with Moscow, U.S. pundits and policymakers should keep two fundamental realities in mind. First, America and its European allies need positive relations with Moscow, if for no other reason than to forestall Russian steps that could seriously damage Western interests. For example, as Russia’s current account surplus continues to balloon alongside rising oil prices, Moscow is emerging as an increasingly important purchaser of U.S. Treasury securities and agency paper. Would those calling on Washington to deliver various ultimatums to Russia prefer that Moscow dump its dollar denominated assets? Russian Finance Minister Alexei Kudrin told us recently that Moscow is preparing the ground for the possible introduction of contracts to purchase Russian oil that would be denominated in rubles, rather than dollars. Does the anti-Russia camp want Moscow to take such a step, given its likely negative impact on the dollar’s long-term value?
Similarly, Europe’s need for Russian gas will only continue to grow in coming years. The West cannot “work around” this situation with pipe dreams about new pipelines, like the European Union’s Nabucco project, for which there are insufficient non-Russian gas volumes to make them economically viable. Shortly before he moved from Russia’s presidency to its premiership earlier this year, Putin said that Europe and the United States could build Nabucco and any other pipelines they wanted. But, he asked rhetorically, where would they get the gas to fill them? In the end, Europe cannot provide for its own energy security without a deep and productive partnership with Russia.
Second, the United States and its allies need Russia’s cooperation in the international arena. Russia is and will remain a permanent member of the Security Council, which means that Washington must work with Moscow if there are to be even minimally effective multilateral responses to the full range of “threats to international peace and security,” from Afghanistan to Iran and Zimbabwe. We cannot “work around” this reality by championing a “concert of democracies” as an alternative forum for legitimating decisive international action — an idea that will only antagonize Russia (and China) without providing any strategic benefit.

In addition to the critical arenas like energy security and Iran where Russia is essential and Georgia can play little to no meaningful role, the US very much needs Russian cooperation in the area of unsecured fissile material and non-proliferation efforts.
If this administration or the next thinks this terrorism to be high on the national security threat list then it would do well to heed the advice of experts like Peter Bergen who warn the next big attack will likely come in the form of a radiological bomb. It would be both operationally easy, made from accessible loose fissile material, and guarantee a high fear return by creating the impression that al Qaeda had crossed the nuclear threshold. If this is the case, Russia also becomes the linchpin to securing fissile material sites to stave off such scenarios and moves up even further in the “critical relationships” column.
— Sameer Lalwani

Rumors About Denver
Off to Dearborn