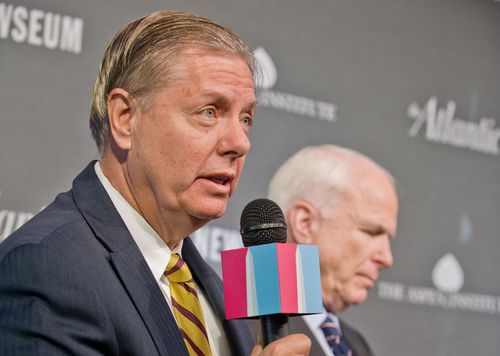 Senators John McCain (R-AZ) and Lindsey Graham (R-SC) are heading to Egypt, apparently as symbols of democratic magnanimity that losers in political contests should not be rounded up and thrown in prison.

Graham told CNN that President Obama and Secretary of State John Kerry believed it would be useful to send Obama’s presidential opponent to Egypt to reinforce to Egypt’s military a message of political inclusiveness.

I think it really does demonstrate how democracy works. They didn’t put John McCain in jail so he could never come back again.

Defense Secretary Chuck Hagel has been running point on Egypt given the close ties between the U.S. and Egyptian military commands and has also been calling for political inclusiveness.  Here is the latest readout of Hagel’s exchange with Egypt Defense Minister and coup leader Abdul Fatah al-Sisi:

Understandably, the Obama administration and legislators like McCain and Lindsey Graham are preaching restraint and ‘inclusion’ to the military leaders who are currently disappearing Morsi’s key supporters and shooting protestors who want their President back in place. American calls for Egypt’s generals to stop the killing are on the right track.

But there is a second bizarre message being telegraphed to those Islamists protesting against the military takeover. Some, like Senator Graham are telling the Muslim Brothers to take their lumps and get back to a democratic process.

In an exchange that aired last Sunday with Senator Graham on CNN’s State of the Union with Candy Crowley, Graham offered context on his and McCain’s rationale for an Egypt trip now. He said that the Brotherhood had to “get out of the streets, back to the voting booth”:

GRAHAM:  …if you’re going to pick between the two of us, Senator McCain is far more valuable than I am.  But, we’ve got a call from the president, Secretary Kerry, the message that the Egyptian military and the Muslim Brotherhood is to get out of the streets, back into the voting booth.

The Egyptian military must move more aggressively toward turning over control to the civilian population, civilian organizations. The military can’t keep running the country. We need Democratic elections. The brotherhood needs to get off the streets and back into the political arena and fight your differences there, and we need to put Egypt back to work. If this continues, it’s going to be a failed state. That’s why we’re going.

But the question that stands out here is why would Muslim Brotherhood members believe in democratic process now? Why would they consent to an electoral plan that asks them to acquiesce to their political leader being toppled if elected?

Adherents of political Islam have for years been debating amongst themselves the nuts and bolts of democratic process and have been struggling with the issue of whether democracy is primarily a tactic to achieve a victor-decides-all political result or whether it is an ongoing process that should include rights for other, not like-minded political entities. The Al Jazeera Centre for Studies has played a leading role in convening these MENA region political Islamists who have been engaging in these debates.

Whether seeing democracy as tactic or process, the key issue is that numerous revolutionaries in the Middle East North Africa nations chose a political rather than violent process for pursuing their aims. It seems that getting Islamists to believe that democratic process, rather than violence, can deliver on their aspirations should be a key national security objective of the United States, Europe, and other liberal powers.

But if this military coup is accepted in Egypt, without a significant rebuke from the world’s leading democracies, why would political Islamists put any faith in the process again? There is an inherent contradiction in the Obama administration calling for “inclusiveness” from military leaders who staged a coup while simultaneously encouraging the Muslim Brotherhood to give voting a chance again. How is this not sending a message to young Islamists who previously played by democratic rules that their only real hope is through armed resistance and violence?

America’s Egypt policy is twisted in a knot. It is an unusual moment when a realist like myself and a liberal interventionist like Jackson Diehl of the Washington Post or Brookings Doha Center Research Director and frequent writer about ‘democracy’ Shadi Hamid find ourselves in agreement. We all see negative consequences of purported democracy-hugging progressives riding to power on the backs of tanks — while those who played by the rules, the Islamists in this case, are arrested and in some cases, killed.

Diehl, Shadi Hamid, and many neoconservatives and liberal interventionists see the Egyptian coup as violating fundamental democratic principles that the U.S. should be working hard to globally promote.

Realists like myself see that cutting off a democratic option to Islamists assures that they will go underground, turn to violence, and/or make the firm decision that democracy is indeed just a tactic to fully dominating a political order, rather than one where power and governance are negotiated. A systemic shift away from non-violent political participation by Arab region youth poses strategic consequences for the U.S. and its allies.

America could decide that it supports a strong-man approach to ruling the Middle East and help support, arm, and fund a new generation of illiberal leaders in Egypt and elsewhere in the region who brutally suppress Islamists — but that would entail enormous military and financial costs in these counties at levels approximating the height of the Cold War. There simply is no appetite among Americans today for that kind of realpolitik style of investment in global authoritarians.

But if supporting strong-man rule isn’t a real option, America has to accept that those parties who engage in and ascend via democratic process may often be objectionable to Western progressives.

Lindsey Graham and John McCain would make history and help yield a third way out of the mess in Egypt if they supported the restoration of President Morsi while simultaneously securing a deal from him and the Muslim Brotherhood that they establish a more flexible and political-minority respecting political process.

That option leaves the legitimacy of the Morsi election in place — while giving Egypt’s embryonic democracy an opportunity to work out its problems in the “inclusive” way the Obama administration is promoting. There will still be problems and pitfalls, but at least then young Islamists would be working inside the system, rather than fighting it violently on the outside.

— Steve Clemons is editor at large of The Atlantic and also serves as editor at large of Quartz, a new digitally native news outlet for the new global economy. Clemons also publishes The Washington Note and is founder of and senior fellow at the New America Foundation’s American Strategy Program. This article first appeared at The Atlantic.  (photo credit: Max Taylor, The Atlantic)

One comment on “Why Would the Muslim Brotherhood Believe in Voting Now?”