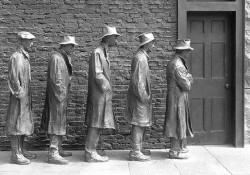 For those interested in following the “real unemployment” rate, which businessman Leo Hindery and others have been promoting as a better measure of unemployment than the more limited data on official unemployment which the government and media tend to prioritize, I attach his letter:

The Bureau of Labor Statistics (BLS) announced this morning that, as reflected in attachment #1, on a seasonally adjusted basis (A) in July 2013, based on its monthly survey of “establishments” (i.e., businesses):

The BLS-defined official unemployment rate declined to 7.4% from June’s figure of 7.6%.

However, as we note each month, these particular BLS figures do not reflect Real Unemployment, since as a core principle BLS counts only those persons who are actively looking for employment.  Specifically:

1.    BLS does not include among unemployed persons (i.e., the ‘numerator’) the 10.7 million workers in total who are either “marginally attached” or “part-time-of-necessity.”

a.    Marginally attached workers, of whom there are now 2.4 million, are workers who, “while wanting and available for jobs, have not searched for work in the past four weeks but have searched for work in the past twelve months.”  Currently included among them are 1.0 million discouraged workers who did not look for work specifically because “they believe there are no jobs available or none for which they would qualify.”

b.    Part-time-of-necessity workers, of whom there are now 8.2 million, are workers unable to find full-time jobs or who’ve had their hours cut back.  These workers are often referred to as the “underemployed”.

2.    BLS does not include in the civilian labor force (i.e., the ‘denominator’) marginally attached workers (although it does include part-time-of-necessity workers).

Ø  The number of Real Unemployed Persons decreased by 412,000 to 22.2 million (i.e., the 11.5 mm unemployed persons BLS identified plus the 10.7 mm workers in total who are either marginally attached (both “discouraged” and “other”) or part-time-of-necessity) as follows:

Note: In addition to the total 22.2 million Real Unemployed Persons at July 31, there were another 4.4 million persons who, while also saying they want jobs, have not looked for work in the past twelve months.  Because they haven’t looked, these persons are not included in the marginally attached workers category – if they are, July’s Real Unemployment Rate of 14.0% increases to 16.4%.

It should be commented that the number of Real Unemployed Persons has declined by 4.3 million since February 2010 when this number was at its highest at 26.5 million.  However, since the adjusted civilian labor force is now 2.0 million persons larger, in essence there’s been an overall jobs improvement of 6.3 million workers since February 2010, which result is often overlooked.

Why Would the Muslim Brotherhood Believe in Voting Now?
Deception in Counting the Unemployed