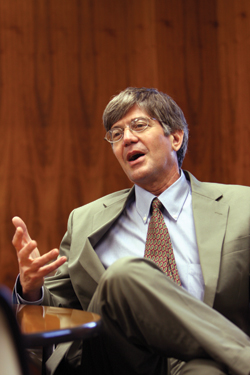 Fantastic news this morning. It has been rumored for some time that James Steinberg, Dean of the LBJ School of Public Policy at UT Austin, would be appointed Deputy Secretary of State under Hillary Clinton.
Well, Steinberg — who has been patient, careful, and never leaked a thing to anyone about his position (despite my best efforts) — got the white smoke signal that he gets the Deputy slot.
This is important news because Steinberg and other friends of his, like Kurt Campbell who heads the Center for a New American Security and plays a leading role on the Obama Transition Team, have been grappling with how to simultaneously modify the process of presidential decision-making as well as adjust the calipers for thinking about and confronting increasingly complex national security threats.
Steinberg, who used to serve as Vice President of Brookings running its foreign policy division, was one of the first leading national security Democrats to call for withdrawal from Iraq because of the deterioration of America’s moral credibility in that war. Interestingly, Steinberg wrote the piece with Michael O’Hanlon, who of course later changed his view on the matter. Steinberg did not.
During the campaign, one of the things few noted was that Steinberg remained distant from all of the presidential contendors. He offered private counsel to all of them — but not on an exclusive basis. When Obama won the race, Steinberg made himself more fully available.
Steinberg was not in the Hillary Clinton camp — nor in the Obama camp, which gives him some latitude and legitimacy in helping to squelch down the drama that still persists between those who were loyal to Hillary before they were loyal to Obama.
— Steve Clemons

3 comments on “White Smoke for James Steinberg at State Deparment”