Last night, President Obama said in his remarks to a joint meeting of Congress:

To seek progress toward a secure and lasting peace between Israel and her neighbours, we have appointed an envoy to sustain our effort.

I dislike the word “sustain” here. I’d rather have seen “reinvent”, “revitalize”, “accomplish results” — something other than a commitment to keeping the “Middle East Peace Business” sustained. But perhaps I’m too cynical and should read less into the President’s words. 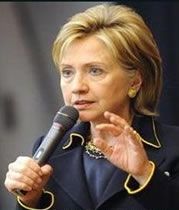 Secretary of State Hillary Clinton will be traveling next to the Middle East — and we look forward to what framing she will give our challenges there. Given Condoleezza Rice’s many trips to Israel and the region, Secretary Clinton will no doubt be there often. She set a great pace and framed things just right (for the most part) in Asia — and I expect she’ll do well in the Middle East as well.
To help discuss various scenarios on the future of the Middle East peace process, I have been asked by a new meetings forum called “The Agenda” to moderate a meeting at the City Club of Washington at 555, 13th St. NW in Washington, D.C.
Please note that at the time I write this, I don’t see the venue listed on the website — but it is CITY CLUB OF WASHINGTON. The event is free and open to the public — and TWN readers are invited to join the interesting session.
You must RSVP at this page.
This is taking place on Monday, 2 March from 3 to 5 pm.
Panelists will be Boston Globe foreign policy correspondent Farah Stockman, New America Foundation Middle East Task Force Director Amjad Atallah, Israel Policy Forum Policy Analysis Director M.J. Rosenberg, and Al Jazeera Washington Bureau Chief Abderrahim Foukara (check out Foukara on The Daily Show)
Join us if you are able. I don’t know if this will be recorded — but if it is I will get it posted on TWN.
— Steve Clemons

23 comments on “What’s Next for the Peace Process?”