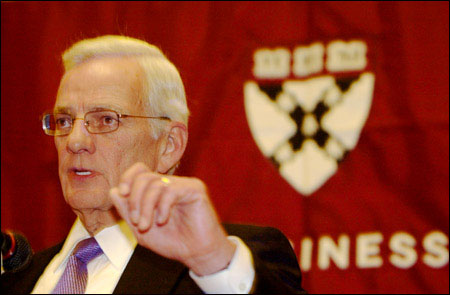 A loyal TWN reader just caught this clip on MSNBC’s “Race for the White House with David Gregory,”
The clip is with former Bush Administration Treasury Secretary Paul O’Neill. He states:

I have not heard either candidate talk about the $53 trillion worth of unfunded liabilities that we have as a nation, that we need to do something about, or we’re going to have a problem that makes this current financial crisis look like child’s plan not too far down the road.
I haven’t heard anybody say in this campaign the 10,000-page tax code that we have is proof that we’re not an intelligent people. And so what are the candidates talking about? They’re talking about more credits, they’re talking about more deductions, they’re talking about more complication in the tax code.
Neither one of them are talking about, we need to fix this monster, which is also part of our problem.
Neither one of them has a really credible energy plan. We had an opportunity of June of this year: American people drove 12.2 billion miles less because the price of gas was over $4. I didn’t even hear Al Gore say, you know what, we ought to keep the gas price up, because it causes people to conserve, and it reduces the greenhouse gas that we’re putting into the environment. When I hear a presidential candidate tell the people, you know what? $4 gas maybe isn’t even good enough. Maybe it ought to be $5, then I’ll say, this is the truth-teller.
We should vote for this person.

— Steve Clemons
Editor’s Note: Thanks to Tahoe Editor for sending this my way.

On the Ground in St. Louis
The Collapse of Consumption?

23 comments on “We Need a Reality Policy Show for Obama and McCain: Paul O’Neill Says Neither Candidate Connecting on Substantive Challenges”