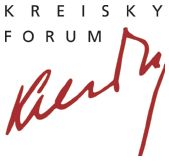 Tonight, I spoke at a forum in Vienna at the Bruno Kreisky Forum for International Dialogue. The topic I was speaking on was “Electing the American President: Do New Media, Blogs and the Internet Make any Difference?”
About 200 people attended. The place was packed; a really terrific, impressive group of young people represented about half the audience. I had a great time, but I have to admit that somewhat like Barack Obama in the debate last Friday (from my perspective — which was not seemingly that of much of the debate viewing audience), I sort of choked and wandered in the first part of my talk and got better in the latter half. The Q&A moderated by the insightful Austrian journalist and blogger Robert Misik got me back on track and helped put the evening in positive territory.
But back to rambling for a moment.

At the beginning of my talk, I reflected on how I got into the new media space — and why wrestling with ideas in the public policy environment had become easier through blogging than in traditional forms of writing, communication, and general policy work. I told the folks about my days with the Nixon establishment and how that had empowered me in some ways in D.C. and made me worry less about fitting in to traditional roles. Policy programs, opeds, books, think tank work, hanging my hat on a Senate staff had now led to Facebook journalism, twitter reporting, political blogging and more. And to be honest, I had a hard time getting into the current election standoff in part because I find myself so distracted by the political drama over the financial crisis and because I can so easily find myself disappointed in both McCain and Obama — both of them.
When I got to the Kreisky Forum — which really is an impressive place with positive energy, loosely and historically affiliated with the Social Democrats here — I realized I wanted to focus on reaching the many young people in the diverse audience I was speaking to and encourage them to one way or another get into more active political participation through writing, blogging, video, and the like.
But lurking in the back of my mind while I was redrafting in my head what I had originally planned to say so as to inspire young potential Austrian bloggers — who are in the wake of right-wing swinging elections here yesterday — was the U.S. financial crisis and what it meant for how America is perceived in the world.
There are three pillars on which American power in the world has been based. The first of these was being the beacon on the hill, an example of justice, liberty, and moral commitment to self-determination, fairness and democratic principle. That pillar got knocked apart by the Iraq War of choice, Bagram and Abu Ghraib prisoner abuses, Guantanamo, torture, and more.
The second pillar was based on military capacity — the once seeming limitless ability the U.S. had to project force globally in ways that no other natoin could do. This infrastructure of bases and globally spread defense platforms still exists, but the military is stretched thin, worn down, and exhausted. Key limits to American power were exhibited in our stewardship of Iraq — and now allies don’t count on the U.S. as much as they used to and many foes and potential foes are moving their agendas.
The third pillar of America’s mystique and power was its economic innovation and dynamism, and the sheer size and depth of the American economy. Much of the world is now choking on U.S.-manufactured poisoned financial products that spread through the global financial system. When I think back to New York Times correspondent Tom Friedman’s assertions about the “golden straight jacket” that other nations had to don to get rich like America — and to the debates about America’s economic model vs. Japan’s and Europe’s — I am ashamed of the arrogance of that time.
This was going through my head tonight as I thought about new media, the elections, and American foreign policy. On the international circuit, it’s really hard to speak to any positive part of the U.S. portfolio without seeming disingenuous. We really have a huge amount of work to do to restore the nation and recreate America’s terms of engagement with friends and allies around the world.
I was impressed by the U.S. Ambassador to Austria who recently arrived here — David Girard-diCarlo who has been active in Republican circles for decades — but who gave a balanced and fair introduction of the political battle that is unfolding between Obama and McCain.
It’s useful to remember as he reminded the audience that Obama was not the likely winner in his party — and McCain’s campaign had once been pronounced dead.
In any case, it was an interesting night — and got me to thinking again about how hard it is for America to be American in the way many have grown used to.
Neither Obama nor McCain can say this kind of thing — and it’s going to be important to conceive a “work out plan” for America and the world soon after the election — in order to establish the terms of a new global social contract.
And that is where I hope a new class of constructive policy bloggers and practitioners — folks in the new media space — can make a difference in the direction the country goes after November.
— Steve Clemons

Liberal Democracy or Empire?
Bush Will Address the Nation, 7:45 am EST

15 comments on “Kreisky Forum: Politcal Blogging, Elections, and the End of the World As We Knew It”