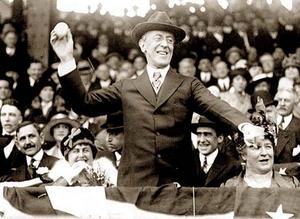 The question of how and when the United States should promote democracy abroad rose to the forefront of our nation’s foreign policy discourse following the terrorist attacks of September 11, 2001 and reached its apex in President Bush’s Second Inaugural Address.
In light of the recent focus on the domestic political systems of states in the Middle East and elsewhere, it is helpful to trace the roots of democracy promotion in American foreign policy.
In an unusually cogent lecture delivered at the New America Foundation last week, New America Foundation Whitehead Senior Fellow Michael Lind demonstrated that unlike other imperial leaders, the goal of every American president from Washington to Eisenhower was not to maximize American power, but to create an international environment in which America’s liberal, democratic way of life could flourish.
Lind explained that Woodrow Wilson’s frequently quoted declaration that the world must be made “safe for democracy” is often misunderstood. Rather than suggesting that the United States promote democracy throughout the globe, Wilson advocated the maintence of a stable international environment safe enough for the United States and other nations to afford the luxuries of personal freedoms, democratic representation, and limited government.

The Cold War is an excellent case in point of how a dangerous international environment imperils liberal democracy. The greatest threat that the Soviets posed to the United States was not the mortal threat of invasion and occupation, but the prospect that our efforts to counter the Soviets would compel us to abandon our way of life and move toward a more militarized, authoritarian society. Fear of the Soviets led to conscription, secret bombing campaigns, and clandestine arms sales.
Lind’s analysis is particularly relevant to the international position in which the United States finds itself today. Radical Islamic terrorism, which John McCain has mischaracterized as the “defining ideological challenge of the century,” poses less danger to our way of life than our own response to the attacks. The human and economic losses of September 11 pale in comparison to those resulting from the culture of fear and overreaction that the attacks spawned.
As Steve Clemons reminds us below, 9/11 led to an unprecedented shift of power to the federal government and to the executive branch in particular. These powers include the Patriot Act, warrantless wiretapping, the mistreatment of prisoners and the $1 trillion undeclared war in Iraq.
When taking stock of the myriad challenges that constitute the United States’ national security portfolio, the next President would be wise to convene a concert of great powers to develop a set of rules, institutions, and patterns of behavior that contribute to a peaceful, cooperative world order, rather than pursuing incremental, crisis-management driven policies.
In addition to being in the United States’ long-term national interests, Lind’s analysis suggests that an effective concert of powers, rather than direct interference in the internal affairs of foreign nations, is the best way to provide those nations with the confidence and resources to develop and sustain liberal societies.
–Ben Katcher

Mike Bloomberg: Two Great Terms is Enough
Kreisky Forum: Politcal Blogging, Elections, and the End of the World As We Knew It

35 comments on “Liberal Democracy or Empire?”