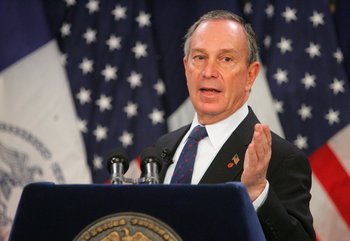 Mike Bloomberg has served city and country well over the past seven years. To mention just a few of his accomplishments with the city government: he has restored New York’s economy and sense of stability, cut crime, pushed growth and tourism into the outer boroughs, put the city on track to be a model of sustainability, encouraged common-sense solutions at the national level, and broke down some important partisan divides. Not bad for two terms.
But two terms is enough. Bloomberg now wants to tear down term limits so he can have a third. As recently as three years ago, he called this idea “a disgrace.”
When Bloomberg was first elected, Rudy Giuliani tried to make the case that he should be allowed to extend his term after the September 11th attacks.
I’m very supportive of term limits in general. But what really riles me up in this case is Bloomberg’s attempt to extend his tenure at a moment of fear at the national and municipal levels.
This may or may not be cynical — Bloomberg may actually believe he’s uniquely qualified to lead the city through this crunch, and he may well be. It doesn’t matter. Crisis points are the worst times to change political rules, especially when those changes result in more concentrated power (See also: Bush Administration, First Term).
If term limits need to be revisited (and I don’t think they do), they should be discussed when heads are cooler. The worst thing we can do at a moment of panic is throw out our carefully considered political foundations.
— Scott Paul

Conservatives Against Sarah Palin: The List is Growing
Liberal Democracy or Empire?