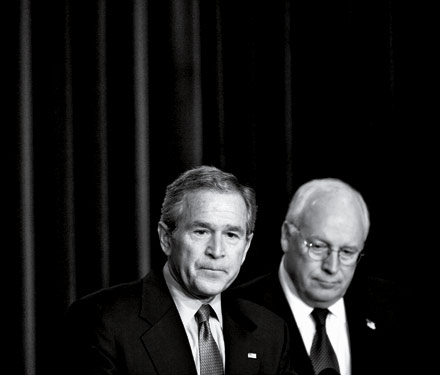 George W. Bush will address the country (and world) at 7:45 am EST Tuesday morning.
Global markets are falling in the aftermath of the single largest point drop of the New York stock exchange in American history.
There is no bail-out deal for the American financial sector, and global credit markets are choking up. The banking and financial industries will be brought to their knees in the coming days — but at the same time, I think that we are seeing a punctuation point marking the end of America’s role as the world’s consumption engine.
The quality of life for the average American will decline, but the trend towards more and more capital dependence on other nations is probably going to begin to reverse itself — or at least significantly slow.
And ironically, this financial disaster will end the war in Iraq and limit significantly the choices that both Obama and McCain might have before them as President.
It also means that all of the other great 21st century challenges out there — from global poverty assistance to an imposed carbon tax on fossil fuel energy consumption — will get less action and less “national investment” than those advocating federal action hoped for.
America will have no choice but to add to its cumulative debt — and to invest in itself, particularly national infrastructure — as a way to keep Americans working and to stimulate important parts of the near and long term real economy.
George W. Bush’s demands early in his administration for unprecedented powers and budgetary authority amidst unprecedented secrecy and non-transparent government was never effectively challenged by the Congress that should have fought for its own constitutional prerogatives nor knocked back in any real way by the full force of the Democratic Party.
But now the marketplace of power in the world and of the global financial order has brought this administration to a devastating conclusion to its influence — and Americans are going to pay a long-term price for the reckless stewardship of America’s economic and security portfolios by this administration.
— Steve Clemons

Kreisky Forum: Politcal Blogging, Elections, and the End of the World As We Knew It
From Surviving Nuclear Knife Edge to 100 Pinpricks: The Next U.S. Foreign Policy