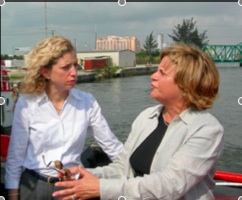 Here is a clip from the Washington Post‘s “The Sleuth”:

Rep. Debbie Wasserman Schultz (D-Fla.) is getting brutally walloped in the liberal blogosphere for refusing to endorse the Democratic challengers to three potentially vulnerable GOP incumbents in Florida.
Liberal bloggers are irate that Wasserman Schultz, who co-chairs the Democratic Congressional Campaign Committee’s Red-to-Blue program, has declined to endorse the Democrats running to unseat Cuban American Reps. Ileana Ros-Lehtinen, Lincoln Diaz-Balart and his brother, Mario Diaz-Balart.
Wasserman Schultz says she doesn’t want to stab GOP members of her own delegation in the back. But liberal bloggers say she’s killing her own while aiding and abetting the enemy.

Just for the record, I’m not in favor of knocking out all Republicans either — so perhaps I have a bit of the Wasserman Schultz sin in my own file. I was for instance supportive of Maryland Eastern Shore anti-Iraq war Republican Wayne Gilchrest who lost his primary battle recently.
But the Diaz-Balart brothers and Ros-Lehtinen are not moderate in any sense of the word, are embracers of Bush’s wars, and have been responsible for sustaining a counter-productive embargo of Cuba by the United States that 183 nations of the world voted against us on this past year in the United Nations.
Debbie Wasserman Schultz is helping to defend the political turf of not the best in the Republican Party — but the worst.
If you want to join the effort today, feel free to call these numbers and express your own point of view.
Please be respectful:

For more on the hypocrisy of Debbie Wasserman Schultz and the “freedom to travel” debate, read this.
— Steve Clemons