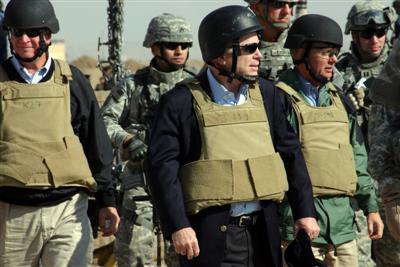 My colleague and friend Anatol Lieven published a no-punches pulled critique of John McCain’s foreign policy and national security probabilities in the Financial Times today, titled “Why We Should Fear a McCain Presidency.”
Lieven makes a point I did recently: McCain used to be considered “an old-style conservative realist.” I suggested that McCain’s Nixonian DNA had gone underground. But the kind of realism McCain used to demonstrate is not old-style. It’s making a comeback in hybrid form, tempered somewhat by a less harsh calculation of state interests and leavened by concern about progressive goals and objectives. Lieven himself makes this point in his excellent book, Ethical Realism: A Vision for America’s Role in the World.
I remain befuddled by McCain’s policy positions. I have long admired McCain on many fronts and like the maverick in him. There are many parts of his profile that I am in complete sync with. However, on the biggest issue of the Iraq War, I differ from him as well as on his seemingly desired Iran War. I keep hoping that we will see evidence eventually that the McCain we have been seeing lately is more veneer than deep — but even veneer can’t be written off easily. This country can’t afford more “wars of choice” and is badly prepared to deal with the type of war in which America has no choice.

We are in a weakened position because our enemies see our limits — and our allies, seeing the same, don’t count on the U.S. as much as they once did. No nations in the world think America is more able today to achieve its objectives internationally than was the case before the Bush administration. And John McCain, much to my own dismay, is suggesting a national security course for the nation more strident and detached from reality than that which the Bush-Rumsfeld-Cheney cabal was promulgating.
John McCain apparently thinks he can win by stirring up the storms of pugnacious nationalism and fear — and calling for “rogue state rollback” in much the same tenor that John Foster Dulles and Curtis LeMay talked casually about “massive retaliation” against and “Rollback” of the Soviet Union.
I’m less strident in my critique of McCain than Anatol Lieven, mostly because I have heard directly from him different sorts of approaches to and framing of what America’s foreign policy should look like, but I agree with Lieven today on much of his argument.
Here is a clip:

It may seem incredible to say this, given past experience, but a few years from now Europe and the world could be looking back at the Bush administration with nostalgia. This possibility will arise if the US elects Senator John McCain as president in November.
Over the years the US has inserted itself into potential flashpoints in different parts of the world. The Republican party is now about to put forward a natural incendiary as the man to deal with those flashpoints.
The problem that Mr McCain poses stems from his ideology, his policies and above all his personality. His ideology, like that of his chief advisers, is neo-conservative. In the past, Mr McCain was considered to be an old-style conservative realist. Today, the role of the realists on his team is merely decorative.
Driven in part by his intense commitment to the Iraq war, Mr McCain has relied more on neo-conservatives such as his close friend William Kristol, the Weekly Standard editor. His chief foreign policy advisor is Randy Scheunemann, another leading neo-conservative and a founder of the Committee for the Liberation of Iraq. Mr McCain shares their belief in what Mr Kristol has called “national greatness conservatism”. In 1999, Mr McCain declared: “The US is the indispensable nation because we have proven to be the greatest force for good in human historyÃ¢â‚¬â€°.Ã¢â‚¬â€°.Ã¢â‚¬â€°.Ã¢â‚¬â€°We have every intention of
continuing to use our primacy in world affairs for humanity’s benefit.”
Mr McCain’s promises, during last week’s visit to London, to listen more to America’s European allies, need to be taken with a giant pinch of salt. There is, in fact, no evidence that he would be prepared to alter any important US policy at Europe’s request.
Reflecting the neo-conservative programme of spreading democracy by force, Mr McCain declared in 2000: “I’d institute a policy that I call ‘rogue state rollback’. I would arm, train, equip, both from without and from within, forces that would eventually overthrow the governments and install free and democratically elected governments.” Mr McCain advocates attacking Iran if necessary in order to prevent it developing nuclear weapons, and last year was filmed singing “Bomb, bomb Iran” to the tune of the Beach Boys’ “Barbara Ann”.

Obama Knows How to Perform, at Least Belatedly in Case of 2002 Speech
Venting About Debbie Wasserman Schultz