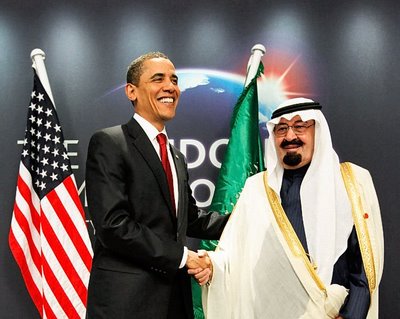 On Monday, 27 April, I will be co-chairing a major national policy forum on US-Saudi economic and strategic perspectives on the Middle East and global economic and security system.
We have quite a line-up which I’ll share below. C-Span will be airing parts of the conference, but the entire program will run live here on The Washington Note — and video will be posted here for later viewing.
This weekend, Secretary of State Hillary Clinton is in Israel and Iraq. There are as yet unsubstantiated rumors that she may drop in on some other countries as well — but we do know that State Department Special Advisor for The Gulf and Southwest Asia Dennis Ross will be in Saudi Arabia on Monday and Presidential special envoy for the Middle East George Mitchell will be in Saudi Arabia this next week as well. All of this is happening while we are holding this US-Saudi policy forum in Washington, DC.
Ambassador of Saudi Arabia to the United States Adel Al-Jubeir has been called back to the Saudi Kingdom yesterday to advise the King in the meeting with Dennis Ross and other as yet unannounced officials.
Other members of the Obama national security team are traveling as well — to points not announced, but my guess is that we have a large chunk of our national security and diplomatic representatives focused on affairs in the region this weekend and next week.
So, big stuff is up.
A source in the White House has shared with me that there is a lot underway right now with Saudi Arabia — and things are “sensitive.” I have no idea what is sensitive — but I do know that the US-Saudi relationship lies at the nexus of many key issues in the region — from the solvency of King Abdullah’s Arab Peace Initiative given trends in Israel and Palestine, to potential opportunities with Syria, to dealing with Iran’s transnational meddling in the affairs inside other countries in the region, to Iraq’s stability, and perhaps most vital at the moment — to figuring out a stabilization scheme for Pakistan and Afghanistan, where Saudi Arabia has significant influence.
I think Secretary of State Clinton and members of the Obama administration’s diplomatic team are working hard on all of these policy fronts in the region. But that said, I believe that the administration is still not as serious as it should be or could be in giving the US-Saudi relationship the attention and respect it deserves — inside Washington, DC.
Because of cultural dissimilarities and almost a purposeful “remoteness” that has become institutionalized in the US-Saudi relationship, except when behind closed doors — or perhaps in the privacy of the oval office or big estates here or there, or in Riyadh — the US-Saudi relationship remains “overly exotic” — and is not acted out in public view to the degree it should be.
The conference that follows below will hopefully become a starting point for a more regular, public exchange of views on the key strategic and economic challenges that face the United States, Saudi Arabia, and the broader Middle East and international system.
Whether many Americans want to acknowledge it or not, the fact is that the US-Saudi relationship is vital to America’s geostrategic and geoeconomic interests today — and like all diplomatic frameworks between key geostrategic players, this relationship as seen from both the American and the Saudi sides has warts and shortcomings. Nonetheless, it is not healthy to allow a vital relationship to be perceived and discussed through only very narrow lenses.
What we have coming up on Monday is pretty significant in my view, and I am grateful to officials in the Obama administration and in the Saudi Kingdom — as well as other private sector speakers — for supporting the kind of open encounter we are promoting in this meeting.
Everyone speaking at this forum — which has been organized jointly by the New America Foundation/American Strategy Program and the Committee for International Trade of the Saudi Chambers of Commerce — is important, but some of the headliners are:

The public part of the conference starts at 8:30 am on Monday, 27 April at the Georgetown Four Seasons Hotel but will be aired here live.
The event is already full beyond capacity — so watching the streaming on the internet may be most comfortable for folks.

The entire program is here:

8:00 am
Registration & Coffee
8:45 am
Welcoming Remarks
9:00 am
A Forward Projection of What the Saudi-US Relationship Should Look Like and Needs to Achieve

The Washington Note in “State of Play”
Guest Post by Jonathan Guyer: Obama’s First 100 Days – A Crisis and Opportunity for Progressives

81 comments on “US-Saudi Relations in a World Without Equilibrium”