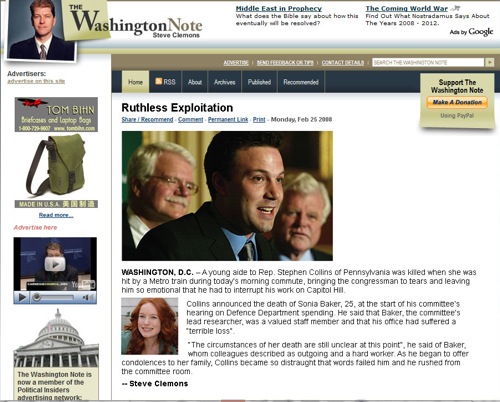 The Washington Note‘s actual image has made it on to Rachel Maddow’s terrific MSNBC show, been highlighted on Jon Stewart’s The Daily Show, and has popped up on Wolf Blitzer’s The Situation Room on CNN, and George StephanopoulosThis Week. . .but there is a new first for TWN.
The DC political media thriller and newly released feature film, State of Play, starring Ben Affleck and Russell Crowe and directed by Last King of Scotland director Kevin Macdonald, shows The Washington Note for a ‘brief second’ in the string of blogs writing about the death of an aide to Pennsylvania Congressman Stephen Collins (played by Affleck).
Here is a slightly larger image than the one above.
The film is interesting — though I think it doesn’t do justice to the increasingly high caliber of blog journalism and political commentary in the U.S. and around the world. After all, the Pulitzer committee just opened its competition this year for the first time to online news. The film basically disses blogs — but when one hears the Washington Globe (aka Washington Post) blogger pine for “ink on the hands” for her and Russell Crowe’s big scandal story — one knows that this is really the last gasp of pulp dependent journalism.
Some DC journalists and bloggers — including Bob Woodard, Bob Schieffer, Margaret Carlson, and myself — made a cameo appearance at the press conference where Congressional wife Robin Wright Penn made a tearful, heartfelt plea to all of us to allow their family time to heal and to stay out of her and Congressman Collins’ private life. That segment — which was actually filmed within days of Elliot Spitzer’s wife offering the same kind of public comment — is on the proverbial cutting room floor.
Nonetheless, it was cool to briefly see TWN for a moment in the film. Though film guys — why no acknowledgment at the end of the film with all the other artists, newspapers, and musicians thanked?? TWN doesn’t appear at all in the credits or acknowledgments.
Headline: Blogger (Accidentally?) Dissed Again. . .
Journalist Cody Shearer was a consultant for this film — and one thing I have to say is that Russell Crowe’s style, language, posture, everything — just had to be modeled on Cody Shearer. Pretty amazing portrayal actually.
More soon.
— Steve Clemons

17 comments on “The Washington Note in “State of Play””