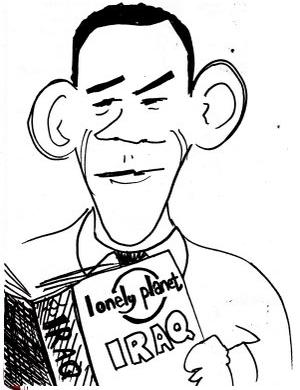 (Credit: Jonathan Guyer)
Jonathan Guyer is a Research Associate at the New America Foundation/Middle East Task Force.
I dropped by Obama @ 100: A Progress Report from The Nation yesterday to hear The Nation‘s editors discuss the best and worst of Obama’s first 100 days, during which the President’s vast array of actions, statements, and policy reviews have cluttered the political scene in Washington.
Here’s a brief recap of The Nation’s take on these first seminal days:
Ã¢â‚¬Â¢ Washington Editor Chris Hayes noted that “Obama is nothing but a deft politician, constantly calculating battles of interest.” As such, Obama gives the American public the good with the bad: the President releases torture memos and then speaks at the CIA the same day. In almost obsessively offering something on the one hand and then something else with the other, Obama leaves the American public to determine which action is sincere and which is meant to cover his back.
Ã¢â‚¬Â¢ William Greider, author of a new article called “Testicular Politics: Obama and the Big Dogs” about Obama’s relationship with Wall Street, claimed that the bailout reflects old time politics. Greider was tough on Obama and Geithner and asserted that Americans would find out over the course of the next several months whether Obama has the courage to take on the bankers.
Ã¢â‚¬Â¢ Looking at Obama’s social policy, Deepak Bhargava, Executive Director of the Center for Community Change, lauded Obama’s efforts to repair the safety net for the country’s neediest. Although Obama has already proposed the largest public expenditure on anti-poverty programs in 40 years, Bhargava argued that due to the severity of the financial crisis, low income families would be worse off in spite of increased spending, and he predicted 20% unemployment among African Americans in the coming years.
Ã¢â‚¬Â¢ Ari Melber analyzed the nature of transparency in Obama’s first 100 days, asserting that the administration received good marks with regard to sharing information with the public and had even been somewhat open to the press. But with regard to the other two branches of government, Melber argued, the administration deserves an “F” for maintaining the Bush administration’s use of the state secrets privilege, which limits third branch oversight just as his predecessor did.
Ã¢â‚¬Â¢ Katrina vanden Huevel, the magazine’s Editor and Publisher, offered a more optimistic appraisal of Obama’s first one hundred days. She praised Obama’s message of re-engagement, which has America back in a leadership role across the globe. But she warned that military escalation in Afghanistan might tarnish America’s image in the Muslim world and lamented that problems inherited from the Bush administration would continue to frame Obama’s policy agenda over the next 100 days.
But the worst part for Huevel? Richard Holbrooke and Larry Summers are back.
Ã¢â‚¬Â¢ Congresswoman Donna Edwards, a Maryland Democrat and member of the Congressional Progressive Caucus, noted that “We have an open opportunity for this administration in a similar way as we have another open opportunity with, for example, Cuba. We have an open opportunity saying we have to maybe engage in a conversation, a dialogue, with Syria that doesn’t have so many absolute conditions that Syria could never come to the table – and I’m actually looking forward to that.”
Concerning the investigation of torture that happened on Bush’s watch, Representative Edwards’ message was clear, “Moving forward requires us to look back.”
Ã¢â‚¬Â¢ Ralph Nader posed a question to the panel: “Are there levers that progressives have to influence this administration beyond being in cheerleader mode?” – but the panelists could not agree on a common strategy.
To cap off the panel, Nichols gave each of the panelists a minute to sum up the highlights and lowlights of the first 100 days – a task which seemed impossible given all that the President has done thus far. Like the president himself, the panel found it difficult to keep their priorities straight – straining to find a voice of criticism while leaving space to agree with the President’s early accomplishments.
— Jonathan Guyer

12 comments on “Guest Post by Jonathan Guyer: Obama’s First 100 Days – A Crisis and Opportunity for Progressives”