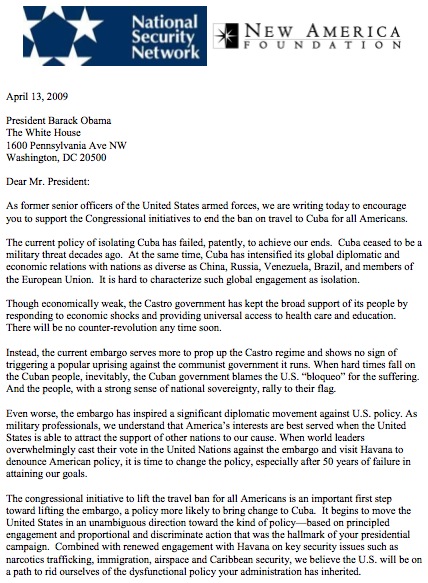 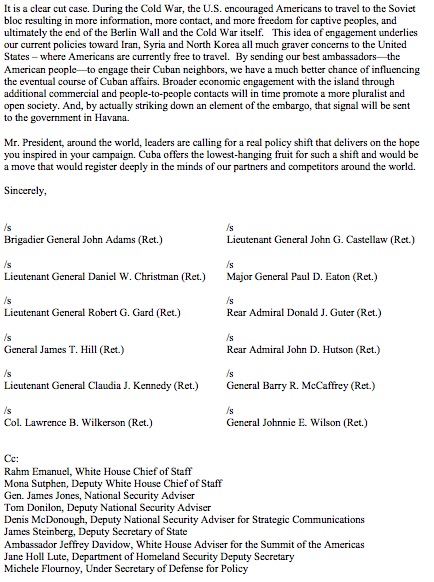 Yesterday, the New America Foundation and the National Security Network delivered the following letter to the White House, signed by some of the most respected former senior officers of the United States Armed Forces.
In the document pasted above and offered in text below, these senior officers urge the President to go beyond his initial statement, issued yesterday, repeal the full travel ban on all Americans and engage the Cuban government in dialogue on key bi-lateral security issues.
Click here to view the letter in pdf format.
From:
General James T. Hill (Ret.)
General Barry R. McCaffrey (Ret.)
General Johnnie E. Wilson (Ret.)
Lieutenant General John G. Castellaw (Ret.)
Lieutenant General Daniel W. Christman (Ret.)
Lieutenant General Robert G. Gard (Ret.)
Lieutenant General Claudia J. Kennedy (Ret.)
Major General Paul D. Eaton (Ret.)
Rear Admiral Donald J. Guter (Ret.)
Rear Admiral John D. Hutson (Ret.)
Brigadier General John Adams (Ret.)
Col. Lawrence B. Wilkerson (Ret.)
To:
The Honorable Barack Obama, President of the United States
As former senior officers of the United States armed forces, we are writing today to encourage you to support the Congressional initiatives to end the ban on travel to Cuba for all Americans.
The current policy of isolating Cuba has failed, patently, to achieve our ends. Cuba ceased to be a military threat decades ago. At the same time, Cuba has intensified its global diplomatic and economic relations with nations as diverse as China, Russia, Venezuela, Brazil, and members of the European Union. It is hard to characterize such global engagement as isolation.
Though economically weak, the Castro government has kept the broad support of its people by responding to economic shocks and providing universal access to health care and education. There will be no counter-revolution any time soon.
Instead, the current embargo serves more to prop up the Castro regime and shows no sign of triggering a popular uprising against the communist government it runs. When hard times fall on the Cuban people, inevitably, the Cuban government blames the U.S. Ã¢â‚¬â€¢bloqueoÃ¢â‚¬â€“ for the suffering. And the people, with a strong sense of national sovereignty, rally to their flag.
Even worse, the embargo has inspired a significant diplomatic movement against U.S. policy. As military professionals, we understand that America’s interests are best served when the United States is able to attract the support of other nations to our cause. When world leaders overwhelmingly cast their vote in the United Nations against the embargo and visit Havana to denounce American policy, it is time to change the policy, especially after 50 years of failure in attaining our goals.
The congressional initiative to lift the travel ban for all Americans is an important first step toward lifting the embargo, a policy more likely to bring change to Cuba. It begins to move the United States in an unambiguous direction toward the kind of policy–based on principled engagement and proportional and discriminate action that was the hallmark of your presidential campaign. Combined with renewed engagement with Havana on key security issues such as narcotics trafficking, immigration, airspace and Caribbean security, we believe the U.S. will be on a path to rid ourselves of the dysfunctional policy your administration has inherited.
It is a clear cut case. During the Cold War, the U.S. encouraged Americans to travel to the Soviet bloc resulting in more information, more contact, and more freedom for captive peoples, and ultimately the end of the Berlin Wall and the Cold War itself. This idea of engagement underlies our current policies toward Iran, Syria and North Korea all much graver concerns to the United States – where Americans are currently free to travel. By sending our best ambassadors–the American people–to engage their Cuban neighbors, we have a much better chance of influencing the eventual course of Cuban affairs. Broader economic engagement with the island through additional commercial and people-to-people contacts will in time promote a more pluralist and open society. And, by actually striking down an element of the embargo, that signal will be sent to the government in Havana.
Mr. President, around the world, leaders are calling for a real policy shift that delivers on the hope you inspired in your campaign. Cuba offers the lowest-hanging fruit for such a shift and would be a move that would register deeply in the minds of our partners and competitors around the world.
— Patrick Doherty

Guest Post by Daniel Levy: No Sphinx, but a Peace Challenge from Damascus
LIVE STREAMING: The Obama Administration’s Cuba Moves & The Summit of the Americas