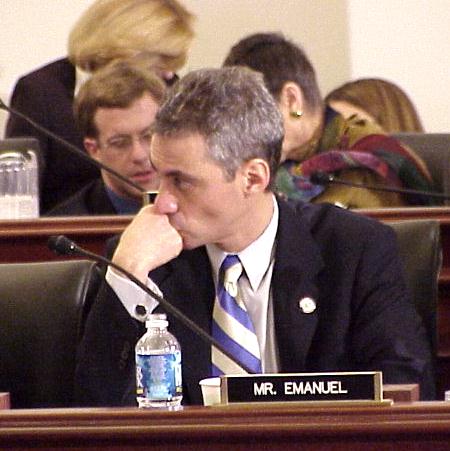 Obama appointment rumors are spinning like crazy in DC. Very, very hard to tell what is real and what is self-initiated advocacy and perch-mongering from those who think they will help run Obama Land.
The most interesting thing I’ve heard — and regret (though I hope he changes his mind or takes over at Health and Human Services) — is that Tom Daschle may be taking himself out of the running as chief of staff in Barack Obama’s White House. Many around Obama think that he needs a cunning, tough, even mean chief of staff and Daschle doesn’t fit that mold. He knows it — but in my view, he’s the single best guy to help massage and manage the many egos that are going to need to be sculpted to achieve success. Daschle can also reach across the aisle — and despite the upswing in seats in the House and Senate — I think Obama needs someone like Daschle helping to run his shop.
I learned this news a couple of days ago — and heard that Rahm Emanuel wants the job. Now there is news that he’s been approached about it — which is the biggest sign that Daschle is off that list. Others under consideration are John Podesta and interestingly, former Commerce Secretary Bill Daley.
Rahm Emanuel will give Obama the tough edge he may thinks he needs at his door — but I think that Daschle, who helped Obama perhaps more than any other person by giving the young Illinois senator the keys to the Daschle political franchise, or Center for American Progress president John Podesta or even Daley would soften the impact on allies of the tough decisions coming that will make a few big winners and leave scores and scores of losers (who thought they would be winners).
Emanuel is interesting — but the first thought that came to mind when I saw word today that Obama had approached him on the role was “Dick Cheney.” Cheney was a Member of the House of Representatives. . .and a Chief of Staff. And both Cheney and Emanuel are addicted to power.
Will Rahm Emanuel help Obama create a more transparent and accountable White House — or will he propogate secrecy? Will Rahm Emanuel work to disown and give back many of the usurped powers that the White House tried to secure for itself at the expense of the legislature and judiciary — or will he try to maintain many of the monarchial instruments Bush and Cheney put in place?
I don’t know the answer actually. I hope Rahm will realize that he’s going to have to see a roll back of White House power for Obama to succeed in the eyes of those who support him and sent him to the world’s top job. We’ll see.
But on other fronts, I’m off to Yale University tonight. Tomorrow, thanks to Yale University scholars Daniel Esty and Bruce Ackerman, I’m giving a couple of talks — one to the university chapter of the American Constitution Society. Then, I’m hanging out with folks engaged in a large scale Model UN exercise….and finishing four, yep four, writing projects by tomorrow. (Yes we can. . .)
More later.
— Steve Clemons