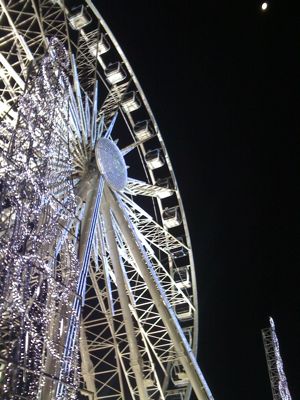 Last night, I took this picture at the grand plaza at Concorde in Paris. I’m now flying to Chicago, and then to Jacksonville, and then to. . .
Soon, it will end.
On the trip, I’ve been thinking about how undefined and blunt the word “corruption” is. What Illinois Governor Rod Blagojevich did seems to me to be the most crass, gross kind of corruption. But it’s different than the corruption of a Tom DeLay.
And I’ve been thinking about the useful sides of corruption in failed states and lesser developed nations. There seems to me to be a substantial difference between the type of corruption we saw historically in the Philippines and Vietnam when under American and French stewardship and the corruption in Japan and South Korea — or the kind of corruption China is orchestrating in African states in which it is doing business.
I’d be interested in any thoughtful commentary by others on this subject.
Off to catch a flight.
— Steve Clemons

18 comments on “The View on My Walk: Thoughts on Corruption”