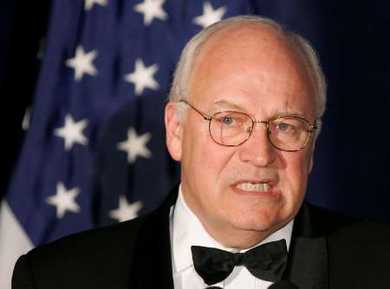 This is a guest post exclusive to The Washington Note by Col. Lawrence B. Wilkerson, who is former chief of staff of the Department of State during the term of Secretary of State Colin Powell. Lawrence Wilkerson is also Pamela Harriman Visiting Professor at the College of William & Mary.
Last night I was on Rachel Maddow’s show on MSNBC at the top of the hour. But before I came on, through the earpiece I listened to the five minutes that Rachel sketched as a lead-in. Most of it was videotape from the last few days of former Vice President Dick Cheney extolling the virtues of harsh interrogation, torture, and his leadership. I had heard some of it earlier of course but not all of it and not in such a tightly-packed package.
Let’s just say that five minutes of the Sith Lord was stunningly inaccurate.

So, when I got home last night, I thought long and hard about what I knew at this point in my investigations with respect to the former VP’s office. Here it is.
First, more Americans were killed by terrorists on Cheney’s watch than on any other leader’s watch in US history. So his constant claim that no Americans were killed in the “seven and a half years” after 9/11 of his vice presidency takes on a new texture when one considers that fact. And it is a fact.
There was absolutely no policy priority attributed to al-Qa’ida by the Cheney-Bush administration in the months before 9/11. Counterterrorism czar Dick Clarke’s position was downgraded, al-Qa’ida was put in the background so as to emphasize Iraq, and the policy priorities were lowering taxes, abrogating the ABM Treaty and building ballistic missile defenses.
Second, the fact no attack has occurred on U.S. soil since 9/11–much touted by Cheney–is due almost entirely to the nation’s having deployed over 200,000 U.S. troops in Iraq and Afghanistan and not to “the Cheney method of interrogation.”
Those troops have kept al-Qa’ida at bay, killed many of them, and certainly “fixed” them, as we say in military jargon. Plus, sadly enough, those 200,000 troops present a far more lucrative and close proximity target for al-Qa’ida than the United States homeland. Testimony to that fact is clear: almost 5,000 American troops have died, more Americans than died on 9/11. Of course, they are the type of Americans for whom Cheney hasn’t much use as he declared rather dramatically when he achieved no less than five draft deferments during the Vietnam War.
Third–and here comes the blistering fact–when Cheney claims that if President Obama stops “the Cheney method of interrogation and torture”, the nation will be in danger, he is perverting the facts once again. But in a very ironic way.
My investigations have revealed to me–vividly and clearly–that once the Abu Ghraib photographs were made public in the Spring of 2004, the CIA, its contractors, and everyone else involved in administering “the Cheney methods of interrogation”, simply shut down. Nada. Nothing. No torture or harsh techniques were employed by any U.S. interrogator. Period. People were too frightened by what might happen to them if they continued.
What I am saying is that no torture or harsh interrogation techniques were employed by any U.S. interrogator for the entire second term of Cheney-Bush, 2005-2009. So, if we are to believe the protestations of Dick Cheney, that Obama’s having shut down the “Cheney interrogation methods” will endanger the nation, what are we to say to Dick Cheney for having endangered the nation for the last four years of his vice presidency?
Likewise, what I have learned is that as the administration authorized harsh interrogation in April and May of 2002–well before the Justice Department had rendered any legal opinion–its principal priority for intelligence was not aimed at pre-empting another terrorist attack on the U.S. but discovering a smoking gun linking Iraq and al-Qa’ida.
So furious was this effort that on one particular detainee, even when the interrogation team had reported to Cheney’s office that their detainee “was compliant” (meaning the team recommended no more torture), the VP’s office ordered them to continue the enhanced methods. The detainee had not revealed any al-Qa’ida-Baghdad contacts yet. This ceased only after Ibn al-Shaykh al-Libi, under waterboarding in Egypt, “revealed” such contacts. Of course later we learned that al-Libi revealed these contacts only to get the torture to stop.
There in fact were no such contacts. (Incidentally, al-Libi just “committed suicide” in Libya. Interestingly, several U.S. lawyers working with tortured detainees were attempting to get the Libyan government to allow them to interview al-Libi….)
Less important but still busting my chops as a Republican, is the damage that the Sith Lord Cheney is doing to my political party.
He and Rush Limbaugh seem to be its leaders now. Lindsay Graham, John McCain, John Boehner, and all other Republicans of note seem to be either so enamored of Cheney-Limbaugh (or fearful of them?) or, on the other hand, so appalled by them, that the cat has their tongues. And meanwhile fewer Americans identify as Republicans than at any time since WWII. We’re at 21% and falling–right in line with the number of cranks, reprobates, and loonies in the country.
When will we hear from those in my party who give a damn about their country and about the party of Lincoln?
When will someone of stature tell Dick Cheney that enough is enough? Go home. Spend your 70 million. Luxuriate in your Eastern Shore mansion. Shoot quail with your friends–and your friends.
Stay out of our way as we try to repair the extensive damage you’ve done–to the country and to its Republican Party.
— Lawrence Wilkerson