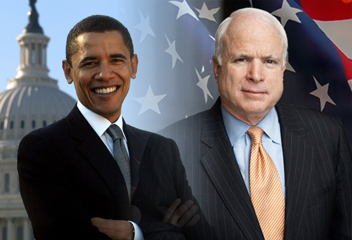 I’m in Barack Obama’s home base town, Chicago, and will live blog this debate. I’m sitting here with Martin Walker, editor emeritus of UPI and Director of AT Kearney’s Global Business Policy Council, as well as his wife, Julia Watson, who publishes the blog, Eat Washington.
Bob Schieffer — whose brother Tom is George W. Bush’s Ambassador to Japan — opens with a question about the beleaguered economy and why each candidate thinks his particular economic plan is better than his rivals.
McCain has started off with a salute to Nancy Reagan who is in the hospital with a broken pelvis after a fall. But then he gets into why Fannie Mae and Freddie Mac were the core root of the housing crisis. Not really true — and I don’t think he spoke in a way where his lines were memorable. But mostly, he didn’t say why his plan is better than Obama’s. . .
Barack is up. Good line….”we are in the worst financial crisis since the Great Depression.” That will be remembered. He said he tried to work for “core principles. . .” And he said we haven’t seen a “rescue package for the middle class.”
Obama has a lot of memorable phrasing. He’s been working at this. McCain was wonky, serious, calm — but not memorable.
Another good line. . .Obama doesn’t want to engineer “a giveaway for banks.”
This is by far the best start I have seen for Barack Obama.
McCain is trying to talk directly to a small business plumber named Joe Wurzelbacher who thinks Obama’s plan will raise taxes on him. Interesting maneuver.
Obama gave a very effective response speaking to a much wider group around “Joe the plumber.” McCain says Obama is trying to redistribute Joe the Plumber’s money to other people. Obama counters that he’s going to lower taxes — or not raise taxes — on 95% of the nation’s citizens.
McCain is coming off as crotchety, snarky. . .but he did a good job connecting to an individual’s personal economic problem. . .Joe the Plumber.
Kind of like pointing up into the gallery at the President’s State of the Union address. . .seems personal, but basically insincere.
Home ownership is teed up by McCain. McCain thinks if we can start “increasing home values” we can help get beyond this problem. How is he going to actually increase home values.
McCain is losing it. . .sounds angry….bubbling that we need to change this, change that — but it’s not articulately or cleanly constructed. He’s running down a technical roster of “to do’s” but it is not organized.
Touche. Obama said that “earmarks” — a centerpiece of the McCain campaign — constitute 1/2 of 1% of spending. Ouch. That was a good line. . .and then Obama went into the macro issues of how large the surplus was seven years ago and how large the deficit is today.
McCain: “Senator McCain. . .I am not President Bush. If you wanted to run against President Bush, you should have run four years ago. . .” It’s getting more tense.
McCain just told Bob Schieffer that he thought he could balance the budget in four years. McCain said “yes” — he could do it. I say, no way. . .
Obama is defending himself against McCain’s charges that he’s not stood up against the leaders in his own party. Obama raised charter schools, clean coal technology and tort reform — none of which are popular with Dem leadership.
Obama just scored by linking McCain to Bush and saying that he’s essential a continuation of eight more years of the Bush administration. Now McCain defends himself. . .
I don’t like his answers but McCain is getting more solid and clear as this moves on.
Ooh…the William Ayers question just came up indirectly. Schieffer asked whether they’d say to each other, face to face, what their campaigns have essentially been accusing each other of. . .
McCain just accused Barack Obama of spending more money on negative ads than any other presidential candidate in history. Also called him untruthful for flip-flopping on a commitment made early in the campaign to take public funding rather than private for his campaign.
Obama is doing a nice job saying that we need to talk about the economy, health care, energy, sending people to college — rather than the tit-for-tat politics as usual game going on. McCain is attacking Obama for running ads that distort McCain’s record on stem cell research, his health care plan, and immigration. . .
McCain is hitting hard — and according to the “males” in uncommitted Ohio voters that CNN is tracking, is scoring some support.
Obama is getting less smooth as McCain pushes harder — and he’s losing momentum. Obama is getting know response on the CNN monitor. . .but this is just a short blip in an otherwise strong performance thus far by Obama.
But clearly McCain succeeded in pushing Obama off balance here — at least for this section.
McCain’s campaign just sent me this graphic depicting amounts spent on negative ads by the Obama and McCain campaigns: 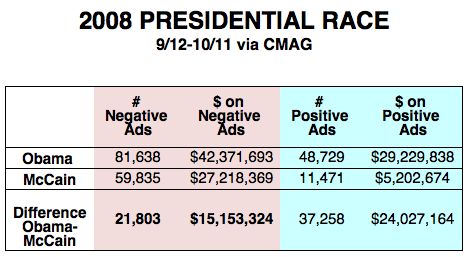 McCain now saying he doesn’t care about an old, washed up terrorist — Bill Ayers — but he thinks Americans should have the right to know about the extent of Obama’s relationship with Ayers, with Acorn, and with other people and institutions who have threatened or do threaten the integrity and stability of America’s democracy.
Obama said look at who I do associate with — Jim Jones, Warren Buffett, Richard Lugar, Joe Biden. Ayers is not a part of Obama’s campaign or advisory group — but Obama said that McCain has made Bill Ayers a central part of his campaign. . .
After a poor start, I have to say that McCain is putting in a strong performance. He’s coming off as serious, direct, confrontive. He’s putting Obama off his game just a bit. . .
McCain is defending Palin — calling her a reformer, a breath of fresh air, an anti-crony type. . .and oh yes, she understands “special needs” children. What really bothers me about this line is that it took her to have a child with special needs to be into the subject to the degree that she is. What if her child turns out to be gay — will she find herself able to move beyond tolerance of homosexuals??
Obama previously did a good job of speaking to Joe Biden’s solid credentials. McCain just called the Biden/Gelb federal plan for Iraq a “cockemany plan”. But essentially, McCain said that Biden could be qualified to be president. . .grudging respect of a sort.
But McCain is staying tense, tough, direct, confrontive.
Now McCain is saying that Obama doesn’t support nuclear power. I know that’s not true. We’ll have to see how Obama responds. . .but I’ve heard Obama talk about expanding “safe nuclear” power.
Obama says that in “ten years”, we can significantly reduce external American dependence on oil. Obama is for some offshore drilling, but drilling will not help Americans move beyond foreign oil dependence. He then said that he’s supportive of wind, biofuels, geothermal, solar, etc. . .but actually he did not say nuclear.
Here is a response from an undecided observer who sends insights to TWN now and then:

Steve,
Seems to me that not only has John McCain come out swinging but that many of his jabs are landing. In part because of clearer statements and accusations but just as much because Obama is (surprisingly) accepting the premise of the argument and justifying it with a (poor) response.
I fear Obama is trying so hard not to make a gaf or lose his notoriously cool demeanor that he is allowing too much to go unchallenged. I think in some of these situations, just once in a while, “Joe six pack” and “Sally hockey mom” might actually like to see a little steam come out of his ears now and then.
(PS – who would have imagined Bob Schieffer would be the best of all the moderators and the one actually holding the candidates’ feet to the fire on actually answering the questions asked? Lastly, please point out the voters should feel pandered to and angered by promises of energy independence. I would expect more from the otherwise sound policy wonks in the Obama camp.)

73 comments on “The Third and Final Round. . .McCain and Obama Tie but McCain Needed More — McCain’s Eye Rolls and “Joe the Plumber” will be Remembered as Highlights”