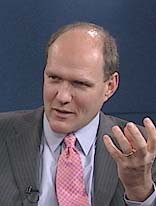 Don’t expect seriousness in this post. I was just chuckling when I got an email moments ago from the Council on Foreign Relations announcing the shortlist for the 2009 Arthur Ross Book Award.
What caught my eye was not the distinguished group of books up for consideration — but rather two members of the jury: Stephen Walt and Robert Kagan. 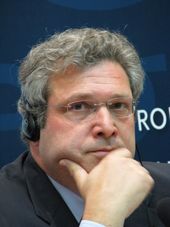 I don’t have time to go into why I think that this would be one of the tickets of the decade to get if one could eavesdrop on any in-person debate — but I can’t wait to read whatever Stephen Walt will or won’t blog about his engagement with Kagan about which books to push and which to bury.
The books under review on the shortlist are:

Gareth Evans for The Responsibility to Protect: Ending Mass Atrocity Crimes Once and For All (Brookings Institution Press)
Dexter Filkins for The Forever War (Knopf Publishing Group)
Philip Pan for Out of Mao’s Shadow: The Struggle for the Soul of a New China (Simon & Schuster)
Kevin Phillips for Bad Money: Reckless Finance, Failed Politics, and the Global Crisis of American Capitalism (Penguin Group)
Ahmed Rashid for Descent into Chaos: The United States and the Failure of Nation Building in Pakistan, Afghanistan, and Central Asia (Penguin Group)
Jeremy Salt for The Unmaking of the Middle East: A History of Western Disorder in Arab Lands (University of California Press)

And the Arthur Ross Book Award jury is:

I wonder if Peter Peterson might fund a reality TV series with the realists and neocons trying to whack each other on non-profit boards.
— Steve Clemons