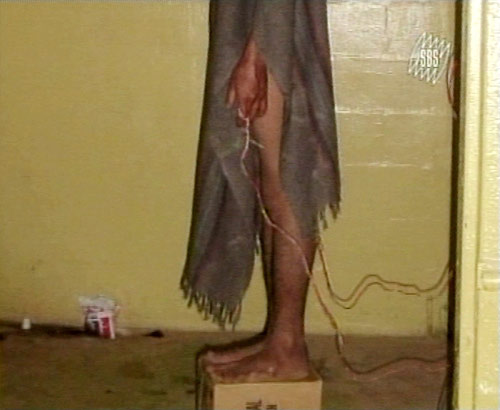 Joseph Margulies in the Los Angeles Times offers anyone who wants to defend the Bush administration’s embrace of torture a chilling retort.
His bottom line: the administration sold out the values Americans cherish most to torture not a kingpin in the al Qaeda network, but a clerk.
Margulies writes:

First, they beat him. As authorized by the Justice Department and confirmed by the Red Cross, they wrapped a collar around his neck and smashed him over and over against a wall. They forced his body into a tiny, pitch-dark box and left him for hours. They stripped him naked and suspended him from hooks in the ceiling. They kept him awake for days.
And they strapped him to an inverted board and poured water over his covered nose and mouth to “produce the sensation of suffocation and incipient panic.” Eighty-three times. I leave it to others to debate whether we should call this torture. I am content with the self-evident truth that it was wrong.
Second, his treatment was motivated by the bane of our post-9/11 world: rotten intel. The beat him because they believed he was evil. Not long after his arrest, President Bush described him as “one of the top three leaders” in Al Qaeda and “Al Qaeda’s chief of operations.” In fact, the CIA brass at Langley, Va., ordered his interrogators to keep at it long after the latter warned that he had been wrung dry.
But Abu Zubaydah, we now understand, was nothing like what the president believed. He was never Al Qaeda. The journalist Ron Suskind was the first to ask the right questions. In his 2006 book, “The One Percent Doctrine,” he described Abu Zubaydah as a minor logistics man, a travel agent.
Later and more detailed reporting in the Washington Post, quoting Justice Department officials, said he provided “above-ground support. … To make him the mastermind of anything is ridiculous.” More recently, the New York Times, relying on current and former intelligence officers, said the initial assessment was “highly inflated” and reflected “a profound misunderstanding” of Abu Zubaydah. Far from a leader, he was “a personnel clerk.”

12 comments on “Bush Administration’s Dark Side: Torturing a Clerk”